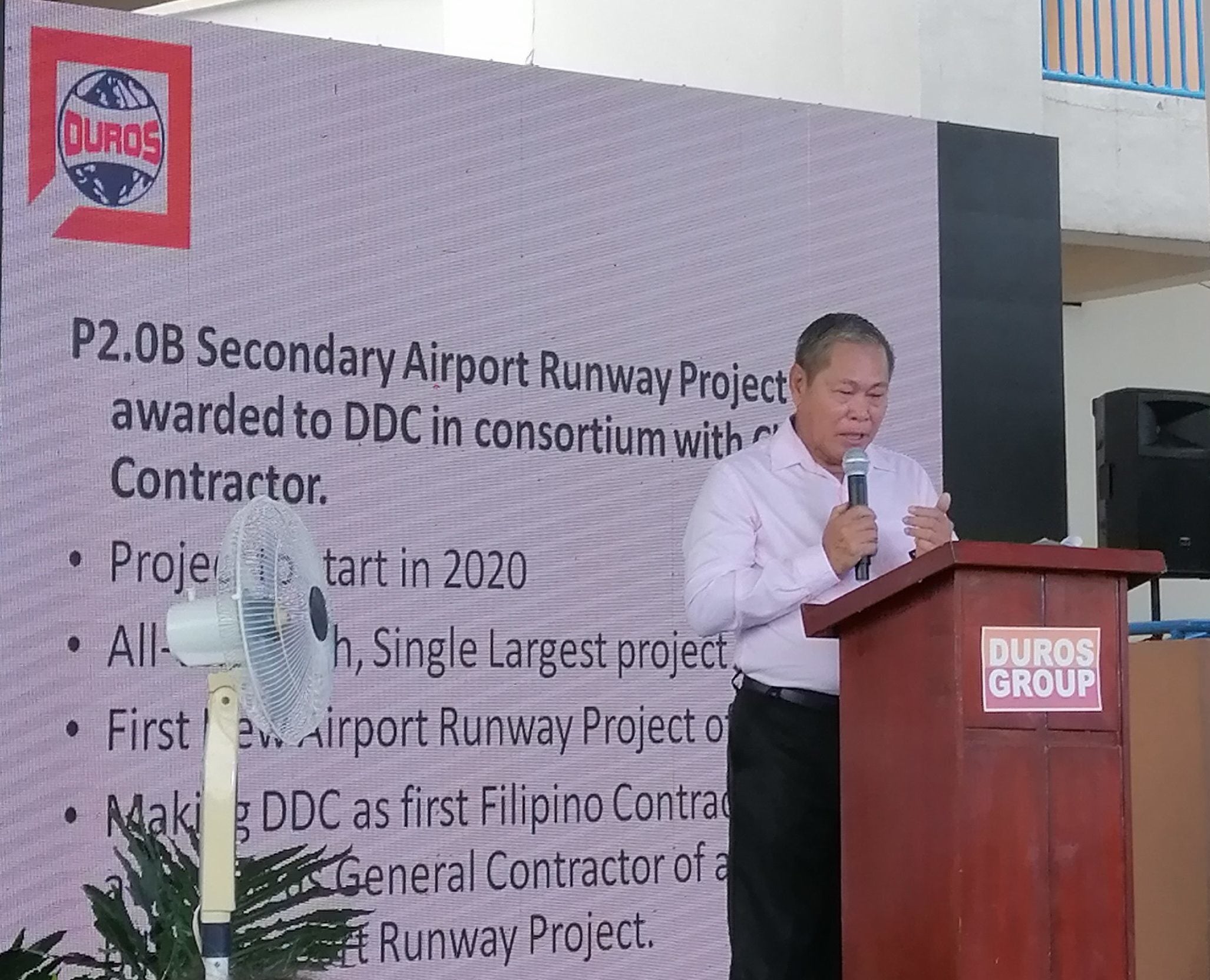 LILOAN, Cebu, Philippines— The consortium of Cebu-based company, Duros Development Corp. (DDC), and China Construction First Group won the bid for the construction of the secondary parallel runway of the Mactan-Cebu International Airport with a total project cost of P2.078 billion.

Rafaelito Barino, chairman of Duros Group of Companies, made the announcement during the State of Duros Address (Soda) held on Friday, January 3 at the Divine Life Institute of Cebu (DLIC) in Yati, Liloan.

DDC is the flagship company of the Duros Group of Companies, which started out as a family venture of Barino along with his wife, Fe Mantuhac-Barino and the Mantuhac siblings.

Barino, the consortium’s representative, said they won the bidding on December 23, 2019.

The consortium is registered with the Philippine Contractors Accreditation Board and will operate under the name: Duros Development Corp./China Construction First Group.

The project is expected to be completed by 2022 or before the term of President Rodrigo Duterte ends.

DDC officials started seeking for a partner with the technical expertise to work on the Mactan-Cebu secondary airport runway project in July 2019.

“We explored possibilities with potential Japanese partners but ultimately, we found a viable partner in a Chinese company,” said Barino, who described the project as the single largest project of DDC.

Barino said DDC is the first Filipino contractor based in Cebu to undertake an airport runway project.

“This is special for us because Duros is the only local contractor in the Philippines that was given the opportunity to bid and undertake a project of this magnitude. No other Filipino-owned company have gone this far. It’s only Duros so far,” he said.

Kim Mantuhac-Raza, business development manager of DDC, said the company is not new to projects involving the airport as they were involved in the land development of the Mactan Cebu International Airport’s Terminal 2.

DDC is also involved in the construction of the corporate building of the Mactan Cebu International Airport which is worth P732 million.

“But this is our first airport runway project and no local developers have that technical expertise to do it. That’s why we sought for  partner with the technical experience,” she told CDN Digital.

Mantuhac-Raza, a civil engineer by profession, said DDC owns 75% of the consortium while the Chinese company covers 25 percent.

“This is a win not just for Duros but for Cebu because we are all going to see the impact of a secondary runway in terms of decongesting the current airport,” she said.

“This is also a legacy that we want to leave the younger generation. There won’t be another secondary runway in Mactan-Cebu airport so this is a milestone for us,” added Mantuhac-Raza.

Mantuhac-Raza said they expect to mobilize personnel and materials this month, January 2020.

In recent years, DDC has built horizontal and vertical developments including the construction of the International Convention Center of Cebu, the main venue of the 2016 International Eucharistic Congress.

Other projects include the Woodland Park Residences in Yati, Liloan; Padgett Place Condominium in Lahug, Cebu City; and One Tectona Tower, also in Yati, Liloan.