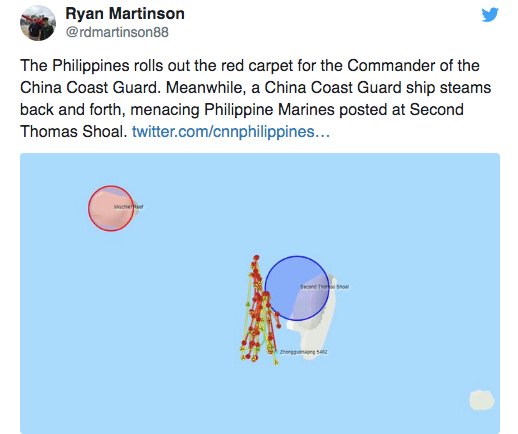 MANILA, Philippines — While a Chinese Coast Guard (CCG) vessel is in the country for a week-long visit to promote friendship and cooperation, one of its sister ships was spotted moving “back and forth” near the Philippine-occupied Ayungin (Second Thomas) Shoal in the West Philippine Sea, likely intimidating the Philippine troops stationed there.

Ryan Martinson, assistant professor of the Chinese Maritime Studies Institute at the US Naval War College, posted a photo of the track of CCG ship 5402 on Tuesday night.

The Philippines rolls out the red carpet for the Commander of the China Coast Guard. Meanwhile, a China Coast Guard ship steams back and forth, menacing Philippine Marines posted at Second Thomas Shoal. https://t.co/vLlFa0iJui pic.twitter.com/On8B7wnXiF

The track posted by the maritime expert showed the ship’s maneuvers at different speeds since Jan. 12.

The Philippine Navy maintains its presence in Ayungin Shoal through BRP Sierra Madre, a transport ship intentionally grounded to serve as a military outpost.

“Based on Joint Task Force West daily report, CCG vessel 5402 was monitored in the area since Jan. 6,” he told INQUIRER.net.

CCG vessels have maintained regular presence near the shoal, he said.

Ayungin Shoal is around 20 nautical miles from Panganiban (Mischief) Reef, one of the features occupied by China in the Kalayaan Island Group that it had transformed into military outposts.

What made the CCG presence in Ayungin Shoal “worse,” according to Martinson, was that the vessel appeared to come from the same unit of the CCG ship currently in Manila for a goodwill visit.

CCG 5204 arrived in Manila on Monday for a series of talks and exercises with the Philippine Coast Guard until Friday to boost cooperation and mutual understanding.

The China Coast Guard ships are a common sight in the South China Sea, including the waters of their neighbors like the Philippines. There are several well-publicized reports of CCG’s coercive actions to Philippine ships and fishermen in the West Philippine Sea.

TAGS: Ayungin Shoal, back and forth, China Coast Guard ship, Moving, near, seen