Want to earn extra points in class? Watch this 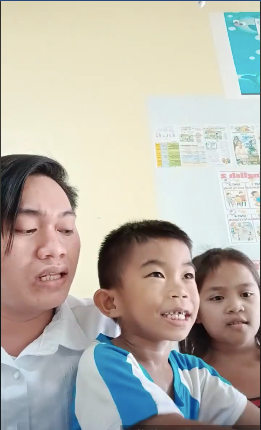 CEBU CITY, Philippines— A teacher from Davao de Oro shared a hilarious way of teaching his pupils how they can earn extra points.

The students in the video are Pipoy and Hannah, both Grade One students of Busalla.

So what’s the story behind the fun video?

Busalla told CDN Digital that before he took the video, he shared with his class a part of his life that got his pupils’ attention.

It was during their class in EDUKASYON SA PAGPAPAKATAO (ESP) subject when Busalla shared his life story, which tackled his love life.

(You know what? The life of teacher is sad because I don’t have a love life. So that teacher won’t be more sad, you should always behave, be good, and listen to teacher.)

Busalla didn’t expect that Pipoy and Hannah would take his words seriously. The two kids actually felt kind of bad after hearing Busalla’s story that they wanted to comfort him with kind words during dismissal.

“So nakauwi na lahat pero pinabalik ko sila dalawa sa room. That was the time na gumawa kami ng video. The video was just for fun and nothing else,” says Busalla.

(So everybody went home but I told them to go back to the room. That was the time when we made the video. The video was just for fun and nothing else.)

The kids wanted to make Busalla feel good so they started saying nice things about him. Pipoy started the video with him describing Busalla as white, followed by Hannah’s description as Busalla being handsome.

Busalla wanted to play around with the kids so he added a little color by telling them he’d give them extra points for every nice thing they’d stay.

And the rest, as they say, is history. Enjoy watching the video. /bmjo