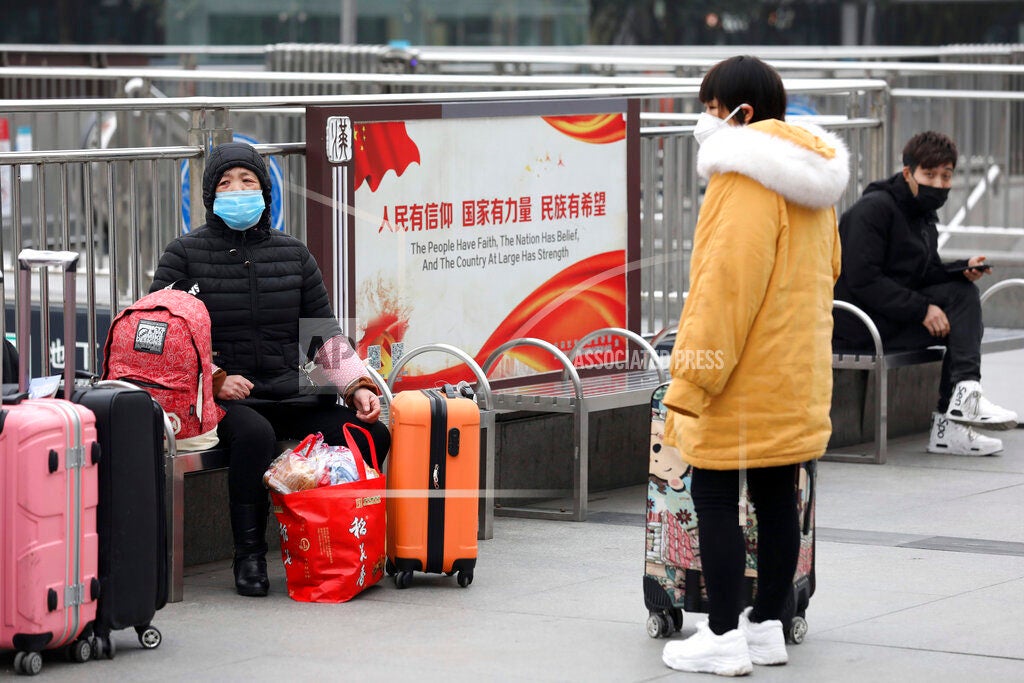 Travelers sit with their luggage outside the closed Hankou Railway Station in Wuhan in central China’s Hubei Province, Thursday, Jan. 23, 2020. Overnight, Wuhan authorities announced that the airport and train stations would be closed, and all public transportation suspended by 10 a.m. Friday. Unless they had a special reason, the government said, residents should not leave Wuhan, the sprawling central Chinese city of 11 million that’s the epicenter of an epidemic that has infected nearly 600 people. (Chinatopix via AP)

Then came a new virus, a rapidly developing outbreak, and the shutdown of her city.

After Wuhan authorities announced the city would be shut down Thursday morning, the airport and train stations were closed, and all public transportation was suspended. Unless residents had a special reason, the government said, they should not leave Wuhan, the sprawling central city of 11 million people that’s the epicenter of the outbreak that has infected hundreds of people.

“Everything has been canceled,” the 27-year-old Bai said by phone. “There’s not much we can do.”

While some social media users described early morning escapes by car, many residents followed the instructions to stay in Wuhan. By mid-afternoon, Bai had heard that highway routes were being closed one by one.

Now, she’s more likely to spend the holiday alone, holed up in her apartment, only going out to buy necessities and with a surgical mask strapped to her face.

She doesn’t plan on meeting up with friends, lest one person infect the others. Because symptoms can appear hours or days after infection, and can feel at first like the common cold, it’s possible that someone may be ill without knowing it.

The disease is a new type of coronavirus, a family of viruses that can cause both the common cold and more severe illnesses like SARS. It appears that people originally caught it from animals sold at a wholesale market in Wuhan, but experts have since confirmed that it can spread between humans.

In about a month’s time, the disease has triggered screenings in airports around the world, as millions of Chinese travel for the country’s most important holiday. The United States, Japan, Thailand and South Korea are among places with confirmed infections, most of them either Chinese tourists or recent visitors to Wuhan.

On Thursday, the first day of the travel ban, many Wuhan residents were resigned to their imposed isolation. They were prepared to lay low, stock up and wait.

Si Weijiang came to Wuhan from Shanghai this week to visit a relative, against the warnings of many around him. He had never expected to be stranded, but he accepted his fate.

“I was already planning to voluntarily quarantine myself upon returning to Shanghai,” Si said.

In the morning, he visited the supermarket, where many people were out buying essentials like rice and cooking oils. Instant noodles were another popular choice. But they weren’t shopping in large quantities, indicating to Si that they believed — rightly or not — that this would all be over soon.

Not every product was easy to find.

Pharmacies were sold out of surgical masks and rubbing alcohol, and supplies of vitamin C tablets were dwindling. Some said grocers in Wuhan were charging exorbitant prices.

“The vegetables in the supermarkets are so expensive,” lamented Zhu Qixin, the owner of a truck company in the city. Lotus root, a staple of the provincial Hubei cuisine, now costs five times as much as it previously did, Zhu discovered after a trip to the store.

The outbreak took on tragicomic tones on Douyin, China’s equivalent of the app TikTok, where users in Wuhan shared videos of deserted streets and masked shoppers, overlaid with pop music. One user who said she was fleeing the city at night posted a video of a dark highway, accompanied by a song that crooned: “We all want to go home for the New Year.”

Ellen Cheng had a feeling that the outbreak would get worse, so she bought an earlier train to her hometown, narrowly missing the travel shutdown.

“I felt conflicted about leaving,” Cheng said. “I missed my family, but I also didn’t want to infect anyone.”

She ultimately decided it would be hard to stay in Wuhan by herself. Many of her colleagues, also originally from out of town, had already departed. If she did end up sick, she would be far from family.

Now she’s isolated herself at her mother’s house in a neighboring province. Out of an abundance of caution, they have resolved not to visit anyone during the holiday. And they will wear their masks everywhere, even inside their home.