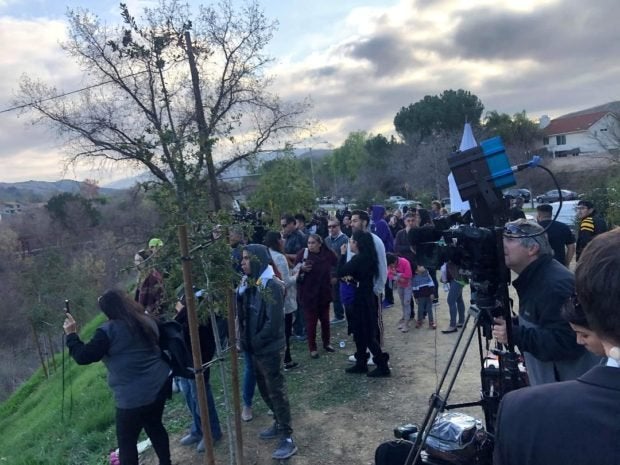 Fans gather near the crash site in Calabasas in California where Kobe Bryant, his daughter were killed in a helicopter crash on Sunday morning (US time). | Photo courtesy of Andy Digal Doria

TAGBILARAN CITY, Bohol — Filipino-American Andy Digal Doria went to church on Monday morning (Philippine time) when he first learned of Kobe Bryant’s  death from a news alert on his phone.

“It’s devastating,” said Doria, a Glendale resident who works as a real estate broker in California.

“We’ve lost a legend,” he told Inquirer in an interview on Facebook Messenger.

Doria, a Los Angeles Lakers fan, immediately went to the crash site in Calabasas, about 30-minute drive from his home.

He said it was foggy and cold on Monday morning but it didn’t hamper fans to visit the crash site.

He said he had seen fans and media and emergency vehicles on Willlow Glen Street and Las Virgenes Road.

Calabasas officials encouraged people to go to the DeAnza Park as Las Virgenes and Lost Hills were off to the public.

Some fans brought LA Lakers jersey and streamers to show their love for Bryant.

He saw smoke from the crash site.

In downtown Los Angeles,  thousands of fans gathered outside the Staples Center  to remember Bryant.

Doria said the Los Angeles Police Department put restrictions around Staples Center. Fans could not be able to access the area, and some areas around the venue were closed.

Bryant was killed in a helicopter crash along with his daughter and 7 others who were on board.

Staples Center was the home of the Los Angeles Lakers, where Bryant spent all 20 years of his career.

Bryant, 41, an NBA great who retired in 2016, spent his 20-year career with the Lakers, earning five National Basketball Association championships and numerous other honors.

Read Next
More help arrive for baby, who lost mom in Liburon fire