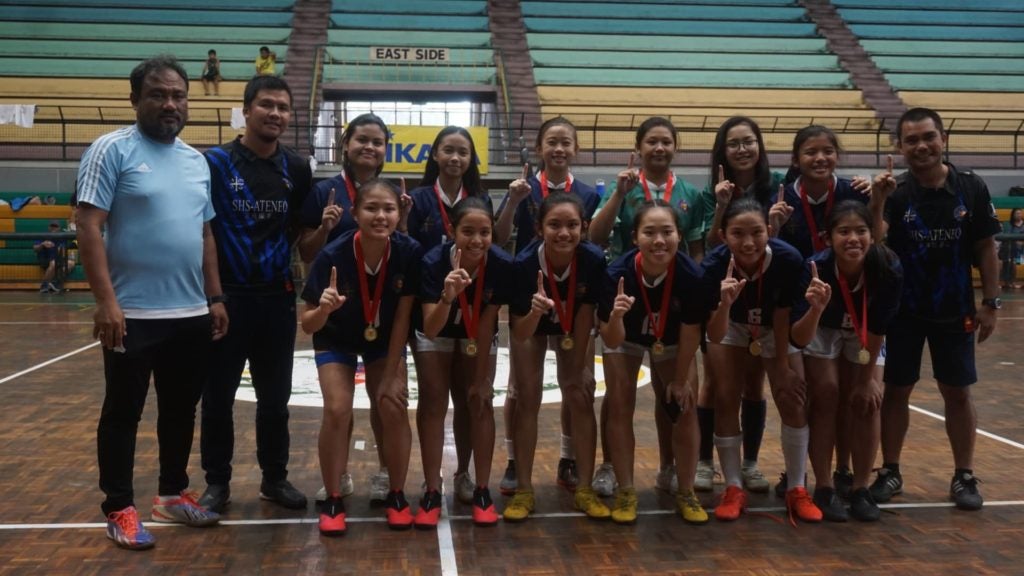 CEBU CITY, Philippines — Starting training at 5:30 in the morning every day before their classes start has paid off for the girls futsal team of the Sacred Heart School-Ateneo de Cebu (SHS-AdC) after they once again dominated the futsal tournament of the Cebu Schools Athletic Foundation Inc. (Cesafi).

This time, the ladies of Ateneo clinched the inaugural secondary title following a 5-1 routing of the University of San Carlos (USC) Basic Education (USC-BED) on Sunday, February 2, 2020, at the USC gym.

Although Ateneo has dominated the Cesafi futsal competition since it was started two years ago, the girls said they still weren’t expecting to bag the secondary title.

“We weren’t expecting it because coach always told us not to expect anything and to always stay humble,” the girls said in unison.

The two previous editions of the Cesafi futsal only had one division—the open where both high school and college teams competed.

However, this year, two divisions were implemented— the secondary and collegiate because each division was able to attract enough number of teams to hold competitions in both divisions.

Aside from bagging the title, two Ateneo girls were given special awards including the Most Valuable Player (MVP) award which was given to Mae Gan Alforque.

“I wasn’t expecting it because it is teamwork and everyone serves,” said Alforque, who last year also made it to the Philippine Under 15 girls national team.

According to Alforque, her stint in the national team helped her become a better player.

(It helped me gain confidence and whatever lessons I had learned there, I also did my best to apply it here. Then I listened to the coaches, trained well and showed respect.)

Alforque said she was dedicating her MVP award to her family, coaches, teammates, all those who supported them, the school and the alumni.

Aside from Alforque, teammate Alexandra Gumilao was also named as the Best Goalkeeper while University of Southern Philippines Foundation’s (USPF) Mercy Cañete was named as the top scorer with the 15 goals that she scored in the entire tournament.

While the girls weren’t expecting to become the secondary champions, their new coach, Martin Ferrer, had confidence that they could do it.

(I have confidence on the team because I can see that they worked hard especially when we trained, they exerted extra effort to succeed.)

Ferrer said that he motivated the team by reminding them of the sacrifices that they had done like waking up early and training hard every day.

“I tell them ‘girls, just apply what we have trained. You absorb then you stay focus, concentrate then believe in yourself and each other. You trust each other. That’s it, then we will be successful’,” said Ferrer.

“Now that they are champions,  I told them ‘girls, we did it, but stay humble. Keep your feet on the ground, and more success to come,” he said.