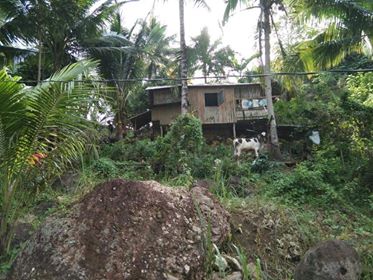 The house where two minors were killed 5 others were injured in a rampage killing past 6 a.m. on February 2, 2020, in La LIbertad, Negros Oriental.| Photos courtesy of the Negros Oriental Provincial Police Office

DUMAGUETE CITY, Negros Oriental — Two boys were killed and five other members from the same family were injured when a man went amok and stabbed the victims on Sunday, February 2, 2020,  in Barangay Pacuan, La Libertad, Negros Oriental.

Wounded were sisters Jenery, 14, Geraldine, 12 and Jane, all surnamed Elarcosa; and their grandparents, Cesar Potestas, 65, and Elsa Potestas 60. 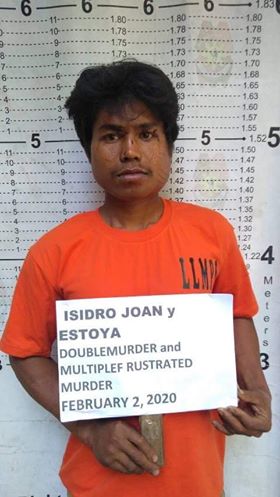 The police gallery photo of suspect  Joan Isidro, who ran amok and stabbed to death two minors and injured 5 others in La Libertad, Negros Oriental on Feb. 2, 2020. | NOPPO photo

The suspect, identified as Joan Isidro alias Badin, was arrested by the responding soldiers from the Pacuan army detachment of the 94th Mandirigma Battalion led by Staff Sergeant Temie Redondo.

Isidro, a resident of the same barangay, barged into the house of the victims around 6 a.m. on Sunday and shouted that he was going to kill the whole family. Armed with a knife, Isidro started stabbing the members of the family,  Entoma told CDN Digital in an interview.

(He barged into the house of the family and went berserk. He was angry with the family.  It was allegedly a family feud. He came and yelled ‘I will kill all of you’  before he went inside the house)

According to Entoma, the grandfather was wounded but was able to run away and asked for help. The two siblings, believed to be sleeping, were stabbed several times.

The grandfather was stabbed and it was fortunate that he was able to run. But the hapless children were repeatedly stabbed)

According to the La Libertad Police Office, the parents of the fatalities were away as they were both working in Cebu City./elb