Ship from China allowed to reprovision in Negros Occ.; Captain, 20 crewmen have no coronavirus symptoms 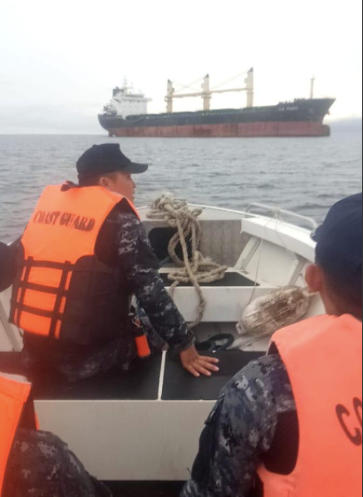 DUMAGUETE CITY, Philippines — A ship that came from Zhoushan, China was only allowed to drop anchor on February 6, 2020 in Negros Occidental waters to reprovision and after this had been done, was asked to leave immediately to their next destination — Cebu.

The request to drop anchor between the waters of Sipaway Island and San Carlos City of Negros Occidental, however, was granted after the Bureau of Quarantine (BOQ) officer and health personnel had boarded the ship for the preliminary checkup on the health of the crew.

The request to reprovision was granted after Dr. Sebastian Tabuga, BOQ officer of Negros Occidental, and health personnel found that the 21 crewmembers of the MV Sea Music did not manifest signs and symptoms of fever, cough and colds, said Commander Jansen Benjamin, Philippine Coast Guard (PCG) Negros Occidental, in an interview.

Benjamin also said that the ship’s crew included 15 Filipinos, 5 Russians and a ship captain, who is a Ukrainian.

Read more: DOTr to all seaports, airports: Be vigilant amid 2019 nCoV threats

The ship captain and the 20 crew members did not show symptoms of the novel coronavirus and were allowed to drop anchor between the waters of Sipaway Island and San Carlos City in Negros Occidental at 3:15 p.m. of Thursday, February 6. See below a video of the Philippine Coast Guard Negros Occidental of the ship being monitored and reprovisioned at the sea waters of San Carlos Bay or the waters between Sipaway Island and San Carlos City.

Benjamin said that the M/V Sea Music based on the Notice of Arrival was scheduled for a “cold layover” at the San Carlos Bay. The ship left China, February 1, 2020.

Read more: Three vessels from China not allowed to dock in Dumaguete port

However, San Carlos City Mayor Renato Gustilo denied the ship’s request to drop anchor and prohibited the crew to disembark.

(The mayor issued an executive order not allowing them to anchor, berth within the vicinity of the waters of San Carlos. But they requested that they be given a chance to reprovision, which means that they can buy rice, food ang water because they had just come from China last February 1. They had not bought any provisions there.)

Their request to reprovision was granted after the BOQ Negros Occidental and health personnel declared them having no symptoms of the novel coronavirus.

Despite this, they were not allowed to disembark from the ship. Instead, their agents brought provision for the crew before they would leave for their next destination in Cebu.