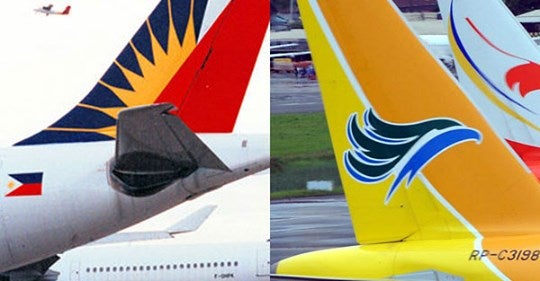 Both airlines resumed flights after the government decided to lift the travel ban imposed on Taiwan due to the COVID-19 virus threat.

Flag carrier PAL said they will operate the following flight schedule going to and from Taipei Taoyuan International Airport:

PAL said passengers originally confirmed on canceled direct flights to Taiwan now have the opportunity to book on restored PR890 and PR891 flights.

In another statement, Cebu Pacific also announced that it will continue operating the following flights:

Cebu Pacific said passengers who book the said flights but have not availed of a refund or travel fund will depart as scheduled.

“They may also check the status of their flights through the Manage Booking portal in the Cebu Pacific website, https://book.cebupacificair.com/Manage/Retrieve/,” read the statement. / MUF

Read Next
Gwen: Non-Cebuano PUMs won’t be quarantined; they will be sent to hometowns outside Cebu