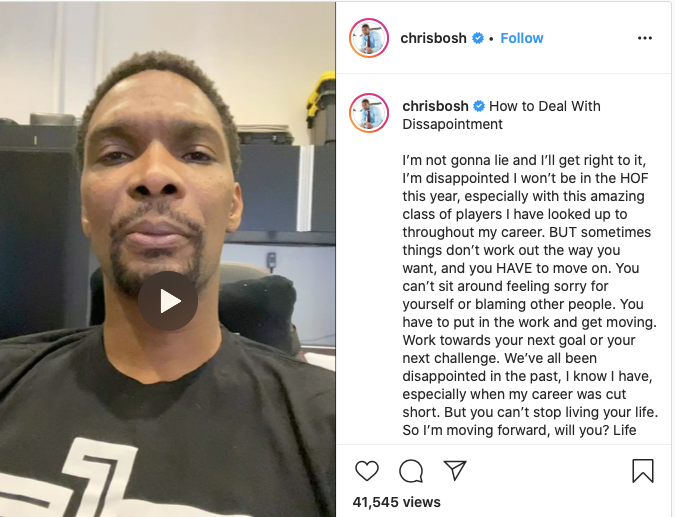 The former Miami and Toronto forward released a video statement on social media Tuesday, using some version of the word disappoint — be it “disappointed,” “disappointment” or “disappointing” — no fewer than 15 times in 5 minutes. | screenshot of Chris Bosh’s Instagram post

Chris Bosh is not hiding his frustration about not being a finalist for this year’s enshrinement class for the Basketball Hall of Fame.

The former Miami and Toronto forward released a video statement on social media Tuesday, using some version of the word disappoint — be it “disappointed,” “disappointment” or “disappointing” — no fewer than 15 times in 5 minutes.

Bosh was a surprising omission last week from the class of eight finalists announced by the Hall as still being under consideration for enshrinement this year, a list that included contemporary players Kobe Bryant, Tim Duncan and Kevin Garnett. The class of inductees will be revealed in Atlanta on April 4, 2020 at the men’s college basketball Final Four, and the Basketball Hall of Fame ceremony is in Springfield, Massachusetts, on Aug. 29, 2020.

“I’m going to be honest with you,” Bosh said. “I’m a competitive man. I’ve been competing my whole life. A lot of people don’t really know that about me, but I’m a fierce competitor. Losing bothers me. Coming up short bothers me. It always has, you know, since the moment I started playing basketball and it kind of bleeds over into everything that I do. So I’ll just get ahead of it. And so you hear this from me, I’m disappointed.”

Bosh is one of 13 players in NBA history to average 19.2 points and 8.5 rebounds in a career that included at least 11 All-Star selections.

Bosh is also the only Hall-eligible player with 17,189 points, 7,592 rebounds, 1,795 assists, 11 All-Star selections and two championships who is not already in, or a finalist this year for, the Hall of Fame. There are other players with those numbers, such as LeBron James and Dirk Nowitzki, who are not yet eligible because they’re still playing or retired too recently.

“One of the things people like to say is, ‘Oh, next year,’” Bosh said. “What if there’s not a next year? That’s something that I think about every day. And I hope you think about it as well, but what if there’s not a tomorrow? What does that even mean? That is a definite question that’s been on my mind quite a bit, but I just have to be honest with you guys. I’m very disappointed.”

Bosh, who turns 36 next month, said he wishes he was still playing and believes he would still be in the NBA if not for the health issues that abruptly ended his career in 2016. Bosh had at least two bouts with blood clots.

He was an All-Star for Miami in his final season, 2015-16. He was averaging 19.1 points and 7.4 rebounds that season and had just arrived in Toronto for that year’s All-Star Game when a clot in one of his legs was discovered.

He never played again. Bosh eventually came to grips with that reality, saw his jersey be retired by the Heat — the team with whom he won two championships, a stint perhaps most notably remembered by his rebound and assist that set up Ray Allen’s season-saving, game-tying 3-pointer with 5.2 seconds left in Game 6 of the 2013 NBA Finals against San Antonio. Bosh also blocked a 3-point try by Danny Green at the end of overtime to seal Miami’s three-point win, and the Heat would go on to win Game 7 for their second straight title.

“I’ve been disappointed with my career coming up short,” Bosh said. “I feel that I should still be playing basketball right now, but that’s neither here nor there. That was in my goals. That was in my plans and it just did not work out like that. I don’t want to be in this position. Now I’m here dealing with that. Had other plans, started making plans on the potentiality of going in with such a great class, didn’t even qualify. You know what I mean? … It’s just disappointing.”

Read Next
How to honor the guerrilla resistance