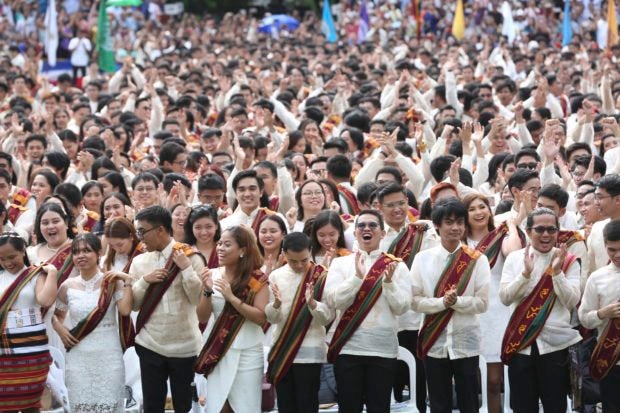 ‘COOLER’ COMMENCEMENT RITES Wearing a “sablay” or handwoven sash as part of a Filipiniana outfit—similar to what has been practiced at commencement rites of theUniversity of the Philippines since 2000—will not only inspire nationalism among graduates but may also prove to be a boon to the local weaving industry, according to an education official’s proposal. —NIÑO JESUS ORBETA

MANILA, Philippines — The toga, long at odds with the Philippines’ tropical climate, has persisted as a graduation staple. A new proposal from a Department of Education (DepEd) official, however, may finally change that.

In a memorandum sent too the agency’s executive committee, Education Undersecretary for Administration Alain del Pascua advocated an end to the use of the toga at graduation ceremonies, proposing instead the more traditionally Filipino “sablay.”

“The use of the toga, with its deep Western roots, has been taken for granted all these years despite its many disadvantages,” Pascua wrote on the aide-mémoire, which had yet to be taken up by the full committee. “It is not Filipino.”

Pascua argued that the colonial remnant did not “inspire loyalty to the nation,” unlike the sablay, a typically handwoven sash with rich ties to indigenous groups across the country.

He said that using the garment at elementary and secondary schools’ closing rites would inculcate patriotism and nationalism among young students, encourage the production of local textiles, and spur a resurgence in weaving traditions that have struggled to stay alive.

It would also boost rural development, Pascua said. If the policy change is adopted by DepEd, the demand for sablay would likely lead to a surge in new jobs for weavers — more than 1 million students graduate each year from Senior High School alone.

Aside from the rich heritage of the sablay, Pascua cited in the memorandum the “added burden on parents” arising from the need to spend for the customary gown and cap.

The toga and its accompanying mortarboard have always seemed ill-suited to the Philippines, where most public school students end the school year in the sweltering summer heat.

Felipe Jocano Jr., who teaches cultural anthropology at the University of the Philippines (UP), said the toga was “rooted in the unique traditions of the European universities.” It was certainly better, he told the Inquirer, to institutionalize academic dress based on the country’s indigenous traditions.

According to Jocano, the Tausug people — who use the term “kindang,” as the word sablay actually refers to women’s dress — wore the cloth during public festivities, making it fitting for closing rites.

“Graduations are after all celebrations,” he said.

Outgoing UP Diliman Chancellor Michael Tan, a former chair of the university’s anthropology department, agreed that the proposal was a welcome, if long overdue, development. UP is intimately associated with the sablay, which it adopted in 2000 as its official academic costume.

Using the traditional garment is not without its challenges, however. Tan said UP sourced its handwoven cotton sablay from Iloilo province and Baguio City, but as weaving has increasingly become a “dying art,” supply has been a prominent issue.

Still, the change in costume would present new opportunities for creativity.

Based on school colors“I hope that different schools will design their own sablay based on their school colors,” Tan said. “Right now, there is a growing interest in textiles again. Maybe, it will help to revive these industries.”

In UP, the sablay primarily comes in the state university’s iconic maroon and green and is adorned with intricate plant-based designs, folk motifs and geometric patterns. The acronym “UP” also appears on the cloth as a symbol based on the baybayin script for U and P.

The sash is traditionally paired with a white or cream Filipiniana outfit.

Tan said it was logical to use the sablay as sashes, which was  common attire among ethnolinguistic groups and known by several different local names, such as “sigay” and kindang.

News of the proposed change first hit on Tuesday, when a copy of Pascua’s aide-mémoire leaked on Facebook. The undersecretary confirmed the veracity of the document on Wednesday but underscored that it “remains a proposition.”

“One positive outcome though of the leak was that we were able to gleam at the public’s sentiment towards the proposal, which has generally been favorable and very welcoming,” Pascua said.