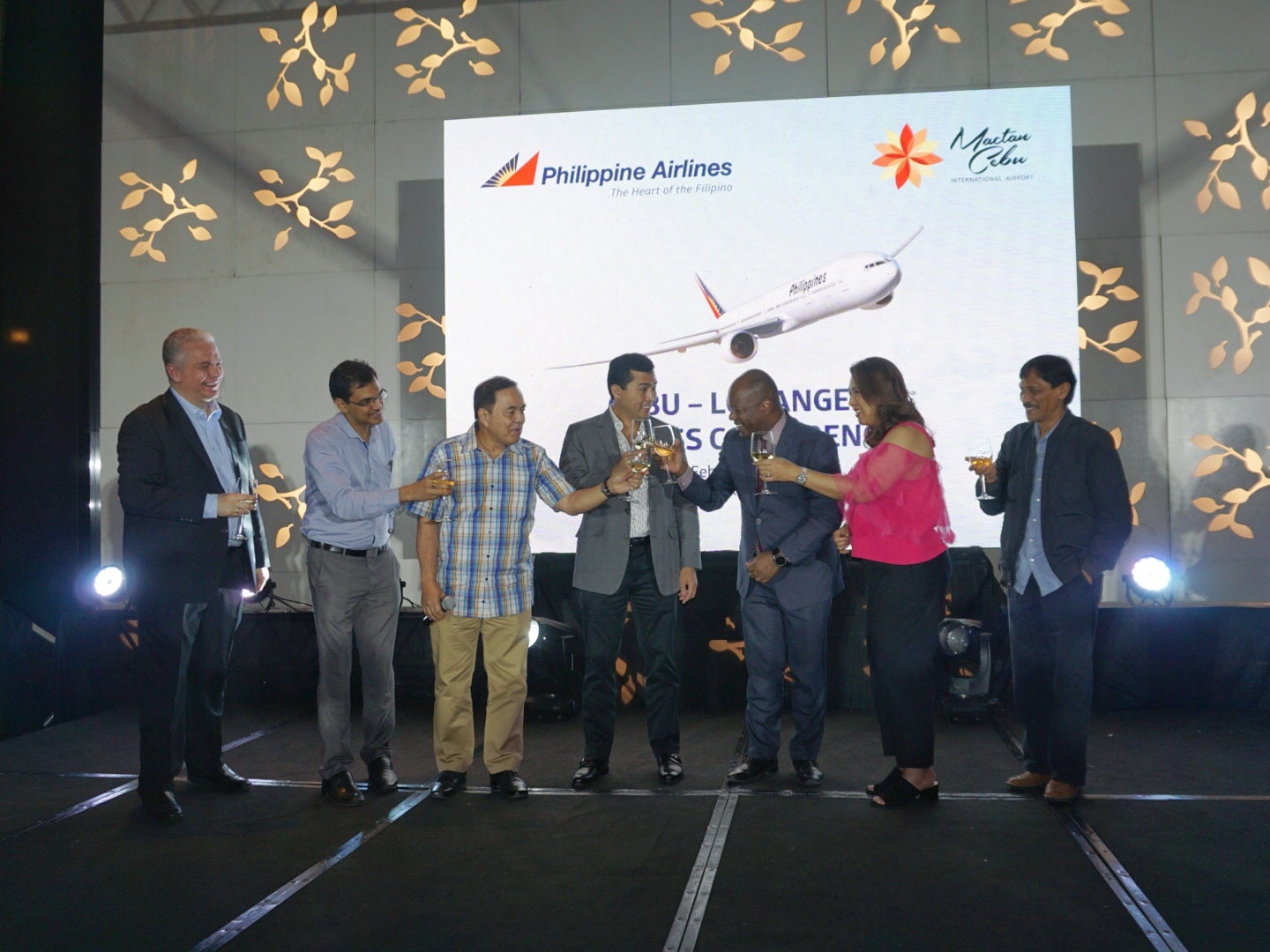 At over 11,800 km, the latest PAL flight will be the longest commercial airline route of Mactan-Cebu International Airport (MCIA). With this latest major investment, PAL strengthens Cebu City as the new international aviation hub of the country.

PAL’s Cebu-Los Angeles direct flight will also offer the fastest way for travellers from Central Visayas to visit the USA with just a 13 to 14-hour travel time. To support this service, PAL will be deploying the Boeing 777-300ER its largest long-range aircraft.

The Boeing 777-300ER has the capability to fly nonstop across the Pacific Ocean on a year-round basis and can accommodate up to 370 passengers. The aircraft is also equipped with state-of-the-art cabin features and amenities. Business and economy classes will enjoy inflight entertainment systems imbedded in every single passenger seat with personalized video touch screens.

“We now have the airplane that can fly nonstop from the USA, the PAL Cebu hub of connecting flights and the convenience of Mactan-Cebu as the country’s most efficient transfer airport,” said PAL Vice President for Corporate Communications Josen Perez de Tagle.

The Cebu-Los Angeles route, which was originally introduced in 2016, is also seen to bring a growth increase and opportunities for local business in Visayas and Mindanao. Cultivating inbound tourism, PAL will also showcase rich and natural cultural wonders in the entire Vis-Min region to American tourists with the new flight service.

“We are determined to show US travelers that Cebu in itself is a world-class leisure and business destination, “ said PAL Senior Assistant Vice President for Luzon, Visayas and Mindanao Sales Harry Inoferio.

Easy one stop connections via Cebu will bridge tourists and balikbayans flying from Los Angeles and arriving at MCIA’s Terminal 2. Passengers will be transferred smoothly to PAL’s Cebu hub network of domestic flights.

“Our Cebu-Los Angeles flights are designed to do just that by partnering with the new star among airports, Mactan Cebu International Airport, to offer a passenger-friendly gateway to the delights of the Philippines,” said PAL Vice President for Marketing Ria C. Domingo.

PAL currently offers five international nonstop destinations in Cebu, namely, Nagoya, Tokyo Narita, Bangkok, Osaka and Seoul Incheon. With the promise of bringing the Heart of the Filipino to all areas of the globe, Los Angeles is the sixth international destination that PAL will be serving nonstop from Cebu.

Through its codeshare partnership with ANA All Nippon Airways, PAL also links Cebu to Sapporo, Miyazaki, Sendai and Niigata in Japan.

They also announced new international routes, including the first-ever nonstop flights between Manila and Perth, Zamboanga and Kota Kinabalu and between Davao and Manado that are all expected to take off in March 2020.

PAL flight PR152 departs from Mactan-Cebu Terminal 2 every Tuesday, Thursday and Saturday at 9:00 p.m. and will arrive at Tom Bradley International Terminal in Los Angeles International Airport at 7:30 p.m. on the same days.

Return flight PR153 leaves Los Angeles at 11:00 p.m. on Tuesday, Thursdays and Saturdays and will arrive in Cebu two days later at 5:00 a.m.

PAL operates an extensive network of flights out of its four hub airports in Manila, Cebu, Clark and Davao. They fly to 44 international and 32 domestic destinations as of today.

Summer weekend getaway in the city

By: PR
Advertorial People and Ideas