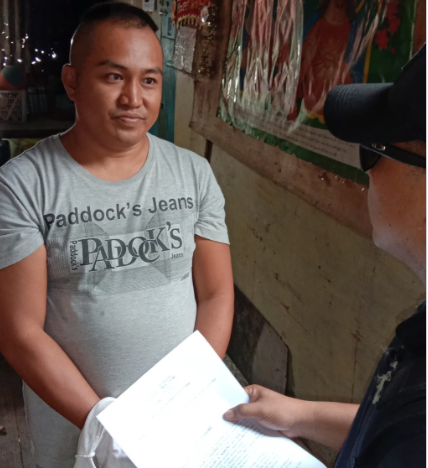 LAPU-LAPU CITY, Philippines — A security guard, who allegedly moonlights as an illegal drugs peddler, was arrested and was caught with 10 grams of suspected shabu in Barangay Pajo, Lapu-Lapu City on February 20, 2020.

Roy Tojeno, 36, was caught with 10 grams of suspected shabu, which was found inside his house  at Sitio Camansi, Barangay Pajo, after police served him a search warrant at past 3 p.m. that day.

Tojeno, who was about to report to work as a security guard of one of the establishments in Barangay Subangdaku, Mandaue City, was held by the member of the Lapu-Lapu City Special Weapons and Tactics (SWAT) team and the Lapu-Lapu City Drug Enforcement Unit (CDEU), who served the search warrant against the suspect.

Cleopas said that after an hour, the police search in the house yielded 10 grams of suspected shabu with an estimated Dangerous Drugs Board value of P70,000, and a loaded unlicensed .357 revolver.

He also said that Tojeno denied owning the illegal drugs especially since it was allegedly found inside his brother’s room.

But Cleofas said that Tojeno had been classified in their drug watchlist as a street level individual after they did a test buy on him.

Tojeno was detained at the Lapu-Lapu City Headquarters Custodial Facility pending the filing of charges./dbs