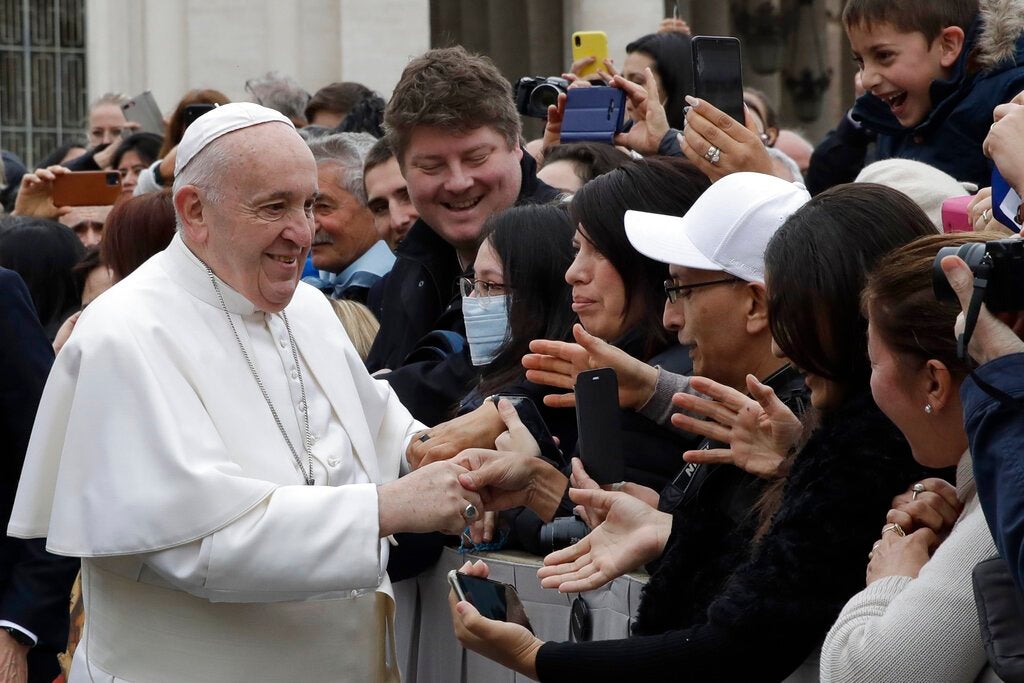 Pope Francis salutes faithful in St. Peter’s Square at the Vatican before leaving after his weekly general audience on Wednesday. (AP)

VATICAN CITY — Pope Francis celebrated the Ash Wednesday ritual that marks the opening of the Catholic Church’s Lenten season in traditional fashion while greeting the public in Rome as other Masses were canceled in northern Italy over fears of the coronavirus outbreak.

Francis and a long line of priests, bishops and cardinals walked in a procession through Rome’s Aventine hill into the 5th-century Santa Sabina basilica for a late-afternoon Mass. Neither the priests nor the faithful wore face masks, but Rome has largely been spared the virus as Italy’s national case count grew to 400.

Other Catholic countries took Ash Wednesday precautions. In the Philippines — Asia’s only majority Roman Catholic country — priests sprinkled ashes on the heads of the faithful rather than making the mark of the cross on their foreheads to avoid physical contact.

“Wherever the ash is placed, on the forehead or on the head, the feeling is the same, it’s uplifting,” Editha Lorenzo, a 49-year-old mother of two wearing a face mask, told The Associated Press in Manila.

At the Vatican, Francis held his general audience as usual in St. Peter’s Square and offered prayers to people sickened by the virus and the medical personnel treating them. In the crowd of thousands, a handful had masks on their faces.

“I want to again express my closeness to those suffering from the coronavirus and the health care workers who are treating them, as well as the civil authorities and all those who are working to help patients and stop the contagion,” Francis said.

Francis kissed at least one child as he looped through the square in his popemobile and made a point of shaking hands with the faithful sitting in the front row. Usually, he only waves. He also greeted prelates with a handshake at the beginning and end of the gathering, but it appeared most clergy were refraining from kissing Francis’ ring or embracing him, as they normally would do.

In his remarks, he urged the faithful to put down their cellphones during Lent and pick up the Bible instead.

“It is the time to give up useless words, chatter, rumors, gossip, and talk and to speak directly to the Lord,” he said.

While Francis went ahead with his usual Ash Wednesday plans, the patriarchate of Venice canceled the Mass scheduled for St. Mark’s Basilica, after a handful of elderly people in the lagoon city tested positive for the virus.

The surrounding Veneto region is one of two northern Italian regions where clusters of cases emerged in Italy. The other is Lombardy.

In the Philippines, the Rev. Victorino Cueto, rector of the popular National Shrine of our Mother of Perpetual Help in the Manila metropolis, said the practice of sprinkling ash on heads of devotees was a precaution to prevent the spread of infections but actually is an old tradition based on the Old Testament.

On Good Friday, which marks Christ’s death on the cross, bishops in the Philippines strongly suggested that churchgoers refrain from kissing or touching the cross, a common practice among Catholics. “Instead, the faithful are requested to genuflect or make a profound bow as they venerate the cross,” said Archbishop Romulo Valles, who heads the bishops’ conference.

Last month, the bishops recommended that Catholics receive the Eucharistic host by the hand instead of the mouth and avoid holding hands in prayer during Masses as precautions amid the viral scare.

In the United States, Catholics filled St. Joseph Cathedral for an Ash Wednesday service in San Diego, where two patients with the virus were recently treated at a local hospital after being evacuated from China. Priests maintained the tradition of placing ashes on parishioners’ foreheads. Some worshipers said they saw little reason for concern, while noting a reluctance among fellow parishioners to shake hands after Mass recently.

“Some people nod and wave but personally that hasn’t stopped me,” said Clarissa Falcon, 47, whose parents live in the Philippines. “I’m used to the physical fellowship. It sort of goes along with the spirit of this — having faith.”