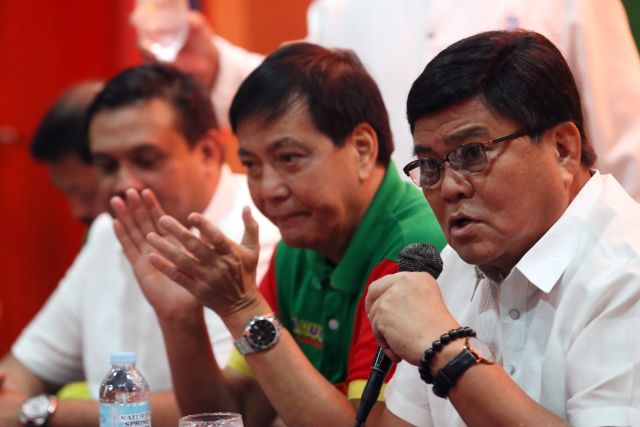 Cebu City Mayor Edgardo Labella shows support to Vice Mayor Michael Rama after the latter has been indicted by the Office of the Ombudsman for graft and corruption. |CDN PHOTO/JUNJIE MENDOZA

“I believe the innocence of the Vice Mayor,” said Labella

Rama is facing graft and corruption cases at the Sandiganbayan after the Office of the Ombudsman to the Visayas found probable cause to indict him and former Bids and Awards Committee members Ester Concha, Rolando Ardosa, Conrado Ordesta, and Collin Rosell.

Former mayor Tomas Osmeña argued that such services should have been bid out because there were many other service providers capable of providing waste disposal services.

Osmeña filed charges against Rama and the BAC members on August 2017. The decision of the Ombudsman to raise the case to the Sandiganbayan was only promulgated in December 2019.

Labella refused to comment on the merits of the case as litigation continues.

However, he expressed support to the vice mayor, who was his running mate in the May 2019 elections and continues to be his closest “ally”.

He urged Rama to invoke the judicial review mechanism and file a motion for reconsideration within the 10 days of the serving of the indictment notice of the Ombudsman.

The mayor said that if the Ombudsman should dismiss the appeal of Rama, the appeal can still be raised to the Supreme Court.

Labella assured the public that if the vice mayor should face the Sandiganbayan over these charges, it does not automatically mean that he will be suspended or that the vice mayoral seat will become vacant.

“Graft and corruption is a bailable offense, so it does not automatically mean the defendant will be suspended,” said the mayor.

Osmeña’s camp already said in previous statements that if Rama will be proven guilty for the criminal cases of graft and corruption, he may perpetually be disqualified from office.

Rama said he leaves the handling of the case to his lawyers. /rcg

Read Next
Regional PRISAA kicks off this weekend in Cebu City