‘Firing up’ the community to prevent fires 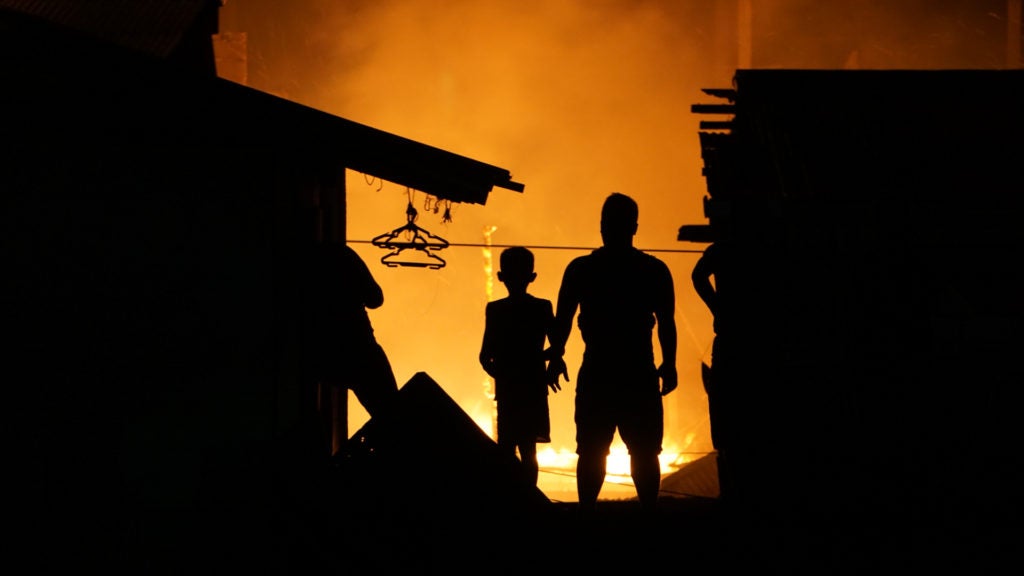 CEBU CITY, Philippines — Three generations of the Cortes family in Barangay Suba, Cebu City have witnessed and suffered losing their house in a fire.

Recently, they were among the over 2,800 individuals in Sitio Sto. Niño in the coastal village of Suba, who were displaced by an evening fire that started in the house of their neighbor last February 25.

At least 311 houses were totally burned.

Susana Cortes, the matriarch of the family, has been living in the area for more than 30 years ago. Her parents were among the first settlers in Sitio Sto. Niño, Barangay Suba.

A retired saleslady in a department store, the 60-year-old Susana was making ends meet by setting up a sari-sari store right in front of their two-story house.

All of her children have families of their own but like most Filipino households, they opted to stay with her as means to budget the income they are earning.

This means that their two-story house, dominantly made from plywood and other wooden planks, sheltered more than 10 individuals. When the fire struck on February 25, nothing was left of it.

“This is the third time I personally experienced losing a house due to a fire. It is heartbreaking but it is a reality that I have to accept,” Susana told CDN Digital in Cebuano.

Susana said fires had previously struck their area in 2002 and 2018.

When asked if she planned to find a new place, the she only shook her head in response.

“We barely have the money to construct our house. I don’t think we can find a new place to settle. We are lucky enough that we own the lot where the house once stood,” she added. 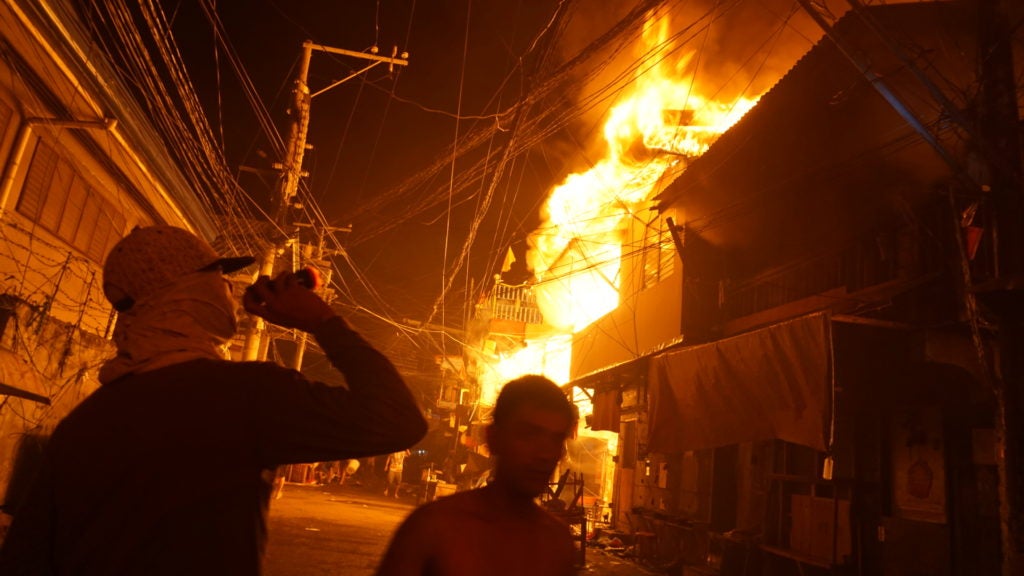 Authorities from the Bureau of Fire Protection (BFP) has identified densely populated areas like Sitio Sto. Niño in Barangay Suba, Cebu City where the Cortes family resides as susceptible to fire incidents.

Data from the Bureau of Fire Protection in Central Visayas (BFP – 7) showed that they recorded a total of 1,893 fire incidents in the region for the entire year of 2019.

Of these fire incidents, close to 50 percent, or at 49.6 percent, are classified as structural fires.

Structural fires pertain to those fires that affected buildings and houses like those in Barangay Suba.

The remaining 871 fire incidents, on the other hand, are categorized as rubbish fire which includes grass fires.

Figures posted by BFP -7 for 2019 accounted for a 50 percent increase from 2018 where 1,005 fire incidents happened in Central Visayas.

The agency also said that deadly fires claimed a total of 33 lives in the region, which was an increase of 66.7 percent from 2018. BFP -7 recorded 22 fatalities from fire incidents for 2018.

“Most of the fire incidents we have for 2019 are due to open flames from rubbish fire. An example of this is kanang magdaob unya mukatay dayun ang kalayo sa mga structures duul niini (when one burns rubbish materials outdoors then the flames will spread to nearby structures),” said Abellana.

Meanwhile, the increase in deaths was attributed to inaccessible roads — a perennial issue for firefighters responding to fire alarms in crowded, residential areas with narrow roads.

Margaha said the BFP – 7 had started to observe this growing concern during the fourth quarter of 2019.

She said incidents like these prompted the BFP to initiate Oplan Ligtas na Pamayanan program nationwide, which aimed to reeducate and capacitate the community when it would come to preventing fires.

“We saw the gap between the community and the firefighters. The average civilian would only think of a firefighter as a mere responder to fire incidents or someone who inspects establishments,” said Margaha.

“However, this time, we would like to reinvent and change the image of firefighters. That we are not just here to respond to fire alarms or issue fire safety inspection certificates. We are a member of the community,” she added.

The BFP’s program involves five stages. A house-to-house survey that will enable fire officials to inspect and examine conditions of structures in a community is the first.

Tagging it as the starting point of Oplan Ligtas na Pamayanan, Margaha said, the house-to-house survey had several parameters which would include a community’s location, electrical lining and installation, and housekeeping practices.

“Recommendations and a list of possible interventions will then be produced, and shown to homeowners,” she said.

The BFP – 7 has started conducting the survey to five barangays in Metro Cebu which, based on the initial details they collected, are highly susceptible to fire incidents.

Information and data gathered during the survey will, in turn, be the basis for fire authorities and local government officials to come up with a hazard map for a certain area or community.

Following more discussions and studies, the hazard map and results of the house-to-house survey will evolve into a Community Fire Protection Plan or CFPP.

“The CFPP will contain the risk level of a community or barangay when it comes to fire, the identified evacuation route and evacuation area. Fire prevention measures will also be solicited for the CFPP,” Margaha said.

After the formulation of the CFPP, the next step for government officers will be to conduct capacity building for the members of the community. Here, a demographic profile of all individuals living and staying in a barangay will be created.

The last stage of the program is the conduct of a fire drill and other related simulation exercises, with the help of the Community Fire Auxiliary Group (CFAG), the BFP’s force multipliers in the grass-roots level.

“The conduct of simulation drills will serve as a reinforcement of all the studies and activities we did under this program. It will also reassess the identified evacuation route, evacuation protocols, and evacuation areas,” said Margaha. 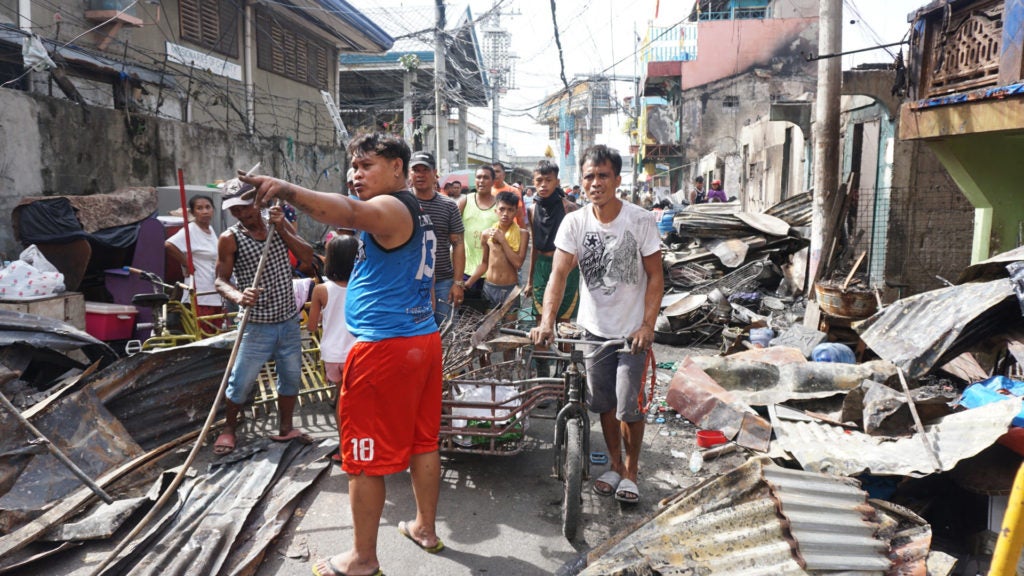 On the morning after, the residents continue to find items to salvage. | Gerard Vincent Francisco

Aside from a five-stage initiative, the Oplan Ligtas ng Pamayanan also involved other activities such as conducting training and seminars to the communities to educate them further on fire prevention.

The numerous education seminars that the BFP – 7 has conducted in several parts of Central Visayas was cited as one of the primary factors on the decrease of fire incidents from January to February 2020, compared to the figures posted for the same period in 2019.

“We noticed a 30 percent drop in the number of fire incidents for the first two months of this year as compared to the same period in 2019,” Abellana said.

The BFP – 7 remained optimistic that they would be able to pull off their plans to tap the community’s assistance on preventing the spread of fires in the region for this year, and that there would be a decrease in the number of fire incidents.

But for fire victims like Susana, their priorities at this point is to rebuild their houses.

“We are really hoping the government will also lend financial assistance to us so that we can rebuild our homes,” Susana said in Cebuano./dbs

Read Next
No otter love: Palawan’s cute but overlooked residents