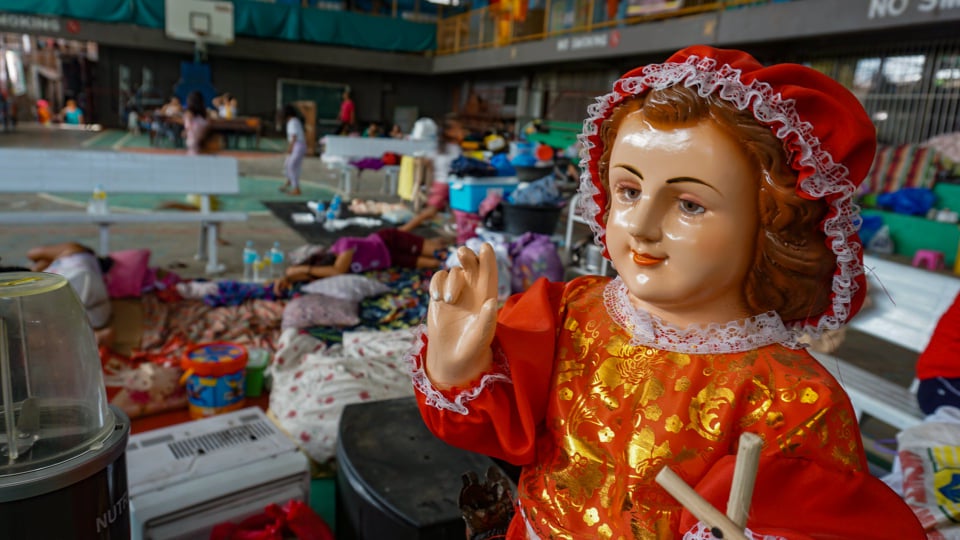 An icon of the Sr. Sto Niño is seen in an evacuation center that houses affected individuals of the fire that hit Barangay Suba in Cebu City on Wednesday night, February 26, 2020. CDN Digital photo | Gerard Vincent Francisco

Most of the people who lost their homes are now staying in three nearby evacuation sites – Pasil Sports Complex, Suba Sports Complex, and a barangay-owned covered court.

One of them is Susana Cortes, a 60 year-old sari-sari store vendor, who is now appealing for government officials to provide them financial assistance so they can rebuild their houses.

“Hopefully they can provide us financial assistance so we can build back our houses. We have no other places to think of staying,” said Susana.

Susana’s two-storey wooden house in Sitio Sto. Niño, Barangay Suba – which is just a few meters away from the seawall that separates the village and Mactan Channel – was totally damaged.

Susana said her family of 10 only managed to save their own lives, and several of their clothes.

They are now staying in Suba Sports Complex as they wait for clearance from the city disaster to rebuild their house.

Suba Barangay Captain Jojo Sable said Cebu Daily News Digital in an interview that the city government has started providing food and other basic needs to the victims.

“What they really need right now is food and basic necessities such as blankets,” Sable said.

He also said the victims can rebuild their homes since most of them have lot titles as proof of ownership.

Meanwhile, the Sangguniang Kabataan of Barangay Suba launched a relief campaign operations for the victims of the fire.

Mantilla, a former basketball player of the University of San Jose-Recoletos whose house was also damaged in the fire, said that as of Thursday, February 27, 2020, they need donations those greatly affected by the fire.

“We need donations especially for our neighbors who lost their homes and weren’t able to save any of their belongings,” he said.  /bmjo