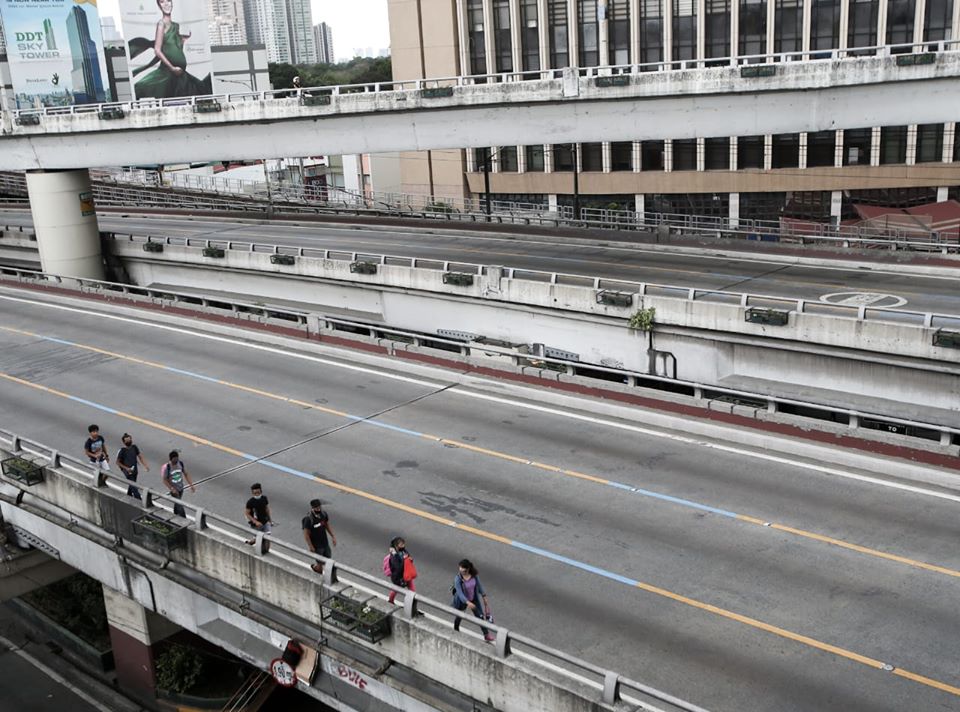 Stranded commuters walk along the empty Ortigas flyover in Mandaluyong City on March 17, 2020 as public transportation was suspended due to implementation of Enhanced Community Quarantine to prevent the spread Covid19 pandemic. | 📷INQUIRER PHOTO / RICHARD A. REYES

MANILA, Philippines — Military trucks and commissioned private buses have been deployed to ferry commuters who were exempted from the Luzon-wide enhanced community quarantine, but found themselves stranded due to the shutdown of public transportation, Malacañang said Tuesday.

On Monday night, President Rodrigo Duterte ordered the imposition of an enhanced community quarantine in the entire Luzon, which halted all public transport and restricted the public to home quarantine to avoid the further spread of the coronavirus disease (COVID-19), which has infected 142 in the country and killed 12.

Exempted from the work stoppage, however, are all businesses, services, and activities related to the production or provision of food, medicine and health, banking and finance, public utilities and mass media.

But immediately after the leveled-up quarantine standard, employees were treated to a confusing implementation of the police checkpoints, with public transport not being allowed to ply their usual routes, resulting to hundreds of stranded passengers.

Presidential spokesman Salvador Panelo said reports reached Malacañang about the plight of workers and employees stranded from work, as well as those health workers and those in the exempted group on Day One of the Luzon-wide quarantine.

“We immediately communicated such concern to the Department of National Defense (DND) Secretary Delfin Lorenzana and the latter swiftly directed the Armed Forces of the Philippines (AFP) to bring out their army trucks to ferry those who are stranded, particularly health workers and other individuals exempted from the ban, so they can be safely brought to their places of work and their homes after work,” Panelo said.

He added that the Metro Manila Development Authority (MMDA) coordinated with different bus companies, such as Wescapboa, a transport cooperative, and the West Cavite Philippine Bus Operators Association, as well as the Jasper Jean Bus Liner to help ferry those stranded passengers.

“They have started to send out their buses after marking the same with the official logo of the MMDA to put law enforcement agents on notice of their purpose of free public service in favor of those exempted from home quarantine,” Panelo said.

The Palace official commended the bus companies for their “bayanihan spirit”.

Panelo likewise commended AVIS Philippines “for its offer to transport outbound passengers who intend to depart the country in going to the airport and inbound passengers to their respective homes.”

Due to the quarantine, all Luzon airports will also be closed 72 hours after the imposition of the lockdown.

“Everyone is called upon to rise to the challenges of this dangerous and extremely difficult phase of our history as a nation,” said Panelo.

He noted that Duterte himself is “setting an example,” by going out early Tuesday morning to monitor the implementation of the isolation of Luzon.

“The Palace will continue to asses the evolving health crisis to give the appropriate response to any problematic situation during this period even as we assure everyone that the consequent inconvenience arising from this government undertaking is minuscule and temporary as against the end result of securing our safety and survival from the dreaded COVID-19,” Panelo said.

The Palace official reiterated the government’s appeal for the public to exercise self-discipline and cooperation in a bid to contain the spread of virus. /EDV

Read Next
Soriano: CCPO to intensify checkpoints vs criminality, spread of COVID-19