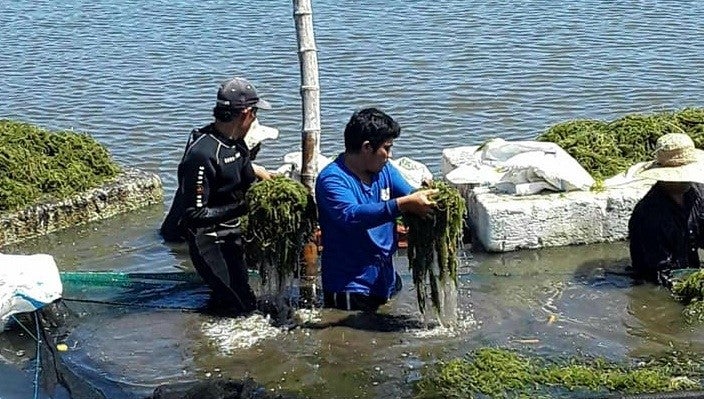 CEBU CITY, Philippines—While the Bureau of Fisheries and Aquatic Resources in Central Visayas (BFAR-7) is taking precautions against the coronavirus pandemic, the bureau staff also continued to implement their projects.

The bureau is currently eyeing at doing some measures to counter the expected warm conditions this second quarter.

One of the bureau’s projects is the testing of a new technology to culture seagrapes, locally known as lato, BFAR-7 revealed in a post on the Facebook page.

According to BFAR-7, the Carmen Brackishwater Fish Farm (CBFF) in Carmen town, Cebu has conducted a test run of a new technology that allows seagrapes to withstand warm temperatures.

CBFF head Joel Clapano said other countries are already utilizing this technology but the Philippines is still on the research phase.

Clapano explained that this new technology uses the plastic tray method.  The seagrapes seedlings will be planted into the tray that is filled with mud before it is submerged into the bottom of the pond.

Since the tray is movable, it can be transferred to the deeper portion of the pond compartment during low tide to save the seagrapes from the scorching heat.

In this way, the seagrapes can survive even amid harsh environments maintaining the good seagrape production, he explained.

Clapano said the Carmen facility adopts this new technology to prepare for the establishment of a nursery farm of seagrapes seedlings.

Meanwhile, the CBFF also seeks to expand its seagrapes production at the Regional Fisheries Training Center in Carmen, Cebu.

This week, the facility’s personnel harvested about 3.5 metric tons of sea grapes to grow these in another fishpond compartment with an area of half of a hectare.

The personnel, are closely monitoring the progress of this undertaking, aims to further double the harvest. /bmjo

Read Next
Over 5,000 monitored for suspected COVID-19 in Central Visayas