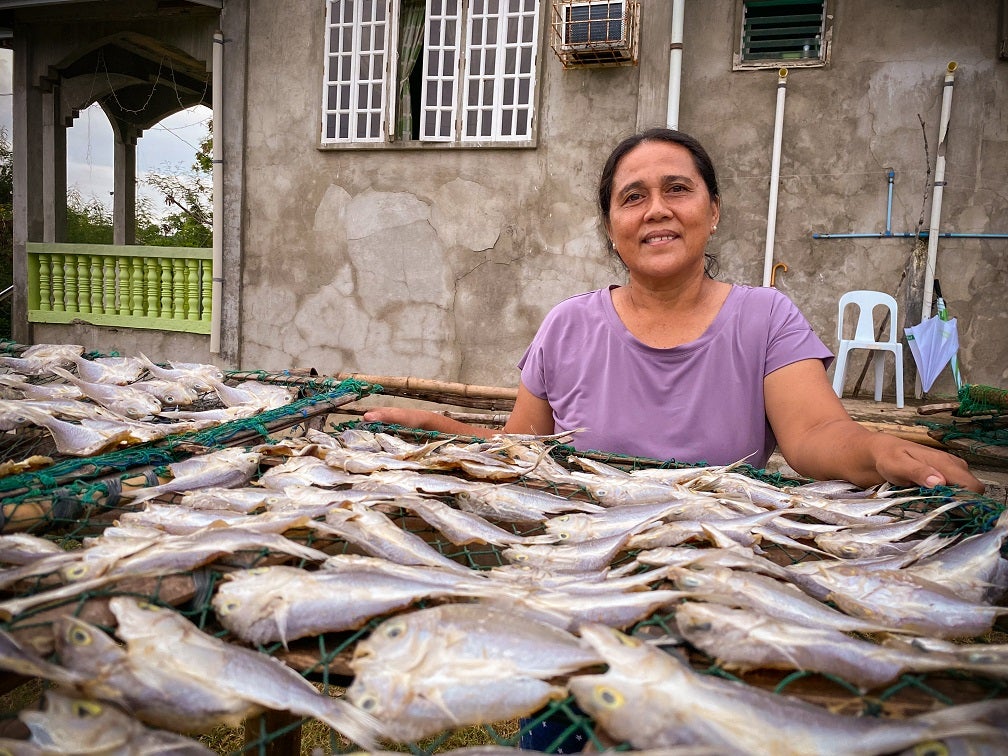 Ester Illusorio, 53, has resorted to using technology to enhance the sales of her buwad. | Contributed Photo

CEBU CITY, Philippines – Bantayan Island in Cebu is known for its fine, white-sand beaches and clear waters, and also for buwad, or sun-dried salted fish, better known as daing or tuyo in other parts of the Philippines.

Fishing is the main livelihood in Bantayan, and buwad-making is a corollary industry. The process is simple, with the fish split open, de-gutted and smothered in salt to prevent bacteria from forming. The fish is then sun-dried and stored for a certain period before distribution to markets. It is eaten fried and also used as a condiment in food preparations.

The village itself has a history as rich as its marine resources. The community is said to be the first parish established in the Visayas-Mindanao, in 1580, according to a Catholic news site. It is known today as the Saints Peter and Paul parish.

During Holy Week villagers, even today, give priority to observing traditional rites and thus are unable to fish. Without fish, villagers are compelled to eat the available alternative, meat.

In consideration of their peculiar situation, Bantayanons were granted a papal dispensation 176 years ago, exempting them from fasting and abstinence, parish priest Joselito Danao explained in an interview with UCAN News last year.

As most Bantayan residents rely on coastal and marine resources for their livelihood, many have ventured into small-scale businesses, such as buwad-making. Today it is second only to fishing.  For one, while villagers may be exempt from Lenten abstinence, the rest of the Catholic communities who observe the practice turn to fish during Lent.

Ester Illusorio, 53, of Patao, Bantayan Island, inherited her buwad business from her parents. “They taught us how to do it,” she said. Back then it was not easy, but sheer determination in the face of hardship drove them to persevere and eventually succeed.

“It was difficult back then to sell our buwad; we would deliver our customers’ orders in the town market. This meant we had to spend extra time, money, and effort to transport our products,” she recalled.

Eventually, cell phones made the task much easier. She now calls and texts her customers directly. Today, aside from SMS and calls, she also uses data connectivity to advertise her products online, drawing more customers and orders.

“My business has been a great help to my family,” said Illusorio. “It put my children through college—they have all finished school. I have a child who’s a seafarer; another is an accountant, while the other works in a prestigious hotel.”

When Supertyphoon Yolanda hit the Philippines in 2013, Bantayan was among the worst-hit islands, as Yolanda cut-off power and communication lines in Bantayan’s three municipalities. ‘Yolanda’ disrupted homes and livelihoods, including Illusorio’s.

“We were cut off from our customers and the rest of the community…During the two months that we had no power and communication signal was unstable, we had to go to the market to reach our customers and sell our products,” she recalled.

For Illusorio and other Bantayan entrepreneurs, reliable connectivity is crucial in sustaining their small businesses. “Connectivity and signal are very important for us entrepreneurs; without it, our business would suffer,” said Illusorio, a Smart subscriber for more than 20 years.

For its sustained network rollout across the country, PLDT and its wireless subsidiary Smart Communications, Inc. were once more hailed as the country’s fastest fixed and mobile networks in the Philippines by Ookla, the global leader in internet texting and analysis, for the last half of 2019.

In 2019, Smart increased the number of its LTE base stations by 51% compared to end-2018 and deploying these in more areas of the country. Underpinning Smart’s network deployment is the continued expansion of PLDT’s fiber infrastructure, which grew by 32% to more than 322,400 kilometers nationwide. This unmatched fiber infrastructure is a critical advantage for Smart.  / dcb