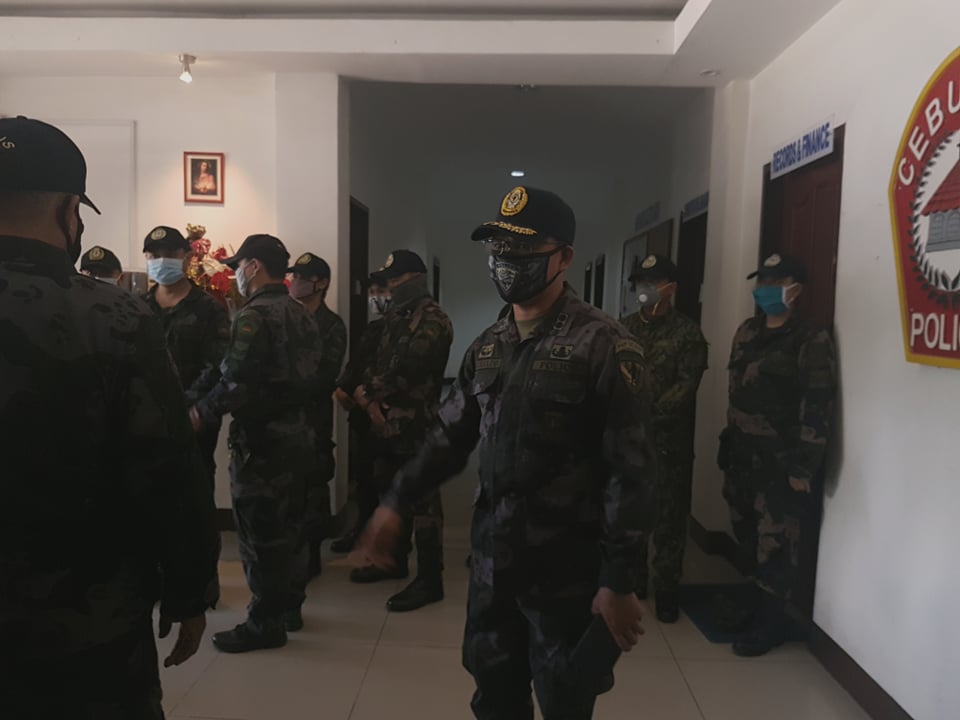 Police Colonel Hector Grijaldo, CCPO chief, gives final instructions to the Cebu City policemen that will be deployed to help in implementing the measures against COVID-19 on March 23, 2020. | Alven Marie A. Timtim

CEBU CITY, Philippines — The Cebu City Police Office (CCPO) will investigate the incident — caught on camera and uploaded online — where a  barangay captain allegedly resisted arrest and apparently got away with it on Sunday evening, March 22, 2020.

The barangay captain was caught drinking with friends in another barangay — outside the home of his girlfriend in Barangay Kamputhaw that night.

Police Colonel Hector Grijaldo, CCPO chief, told reporters in a press briefing on Monday, March 23, 2020, that he would not let the incident pass even if it involved a government official.

The video about the barangay captain resisting arrest went viral online and has garnered negative comments from the public.

The barangay captain, as seen on the video, was speaking on the phone to a certain “major.”

He was explaining the situation to the “major” about his being apprehended for drinking with friends outside the house of his girlfriend in Barangay Kamputhaw.

He also told the “major” about his request to the arresting policemen to just let the incident pass.

It seemed that he succeeded in getting himself out of the situation since the barangay captain was apparently not arrested.

There was also no blotter entry about the incident caught in the video, said Grijaldo.

However, the barangay captain’s two drinking buddies were arrested for drunkenness.

With this, Grijaldo criticized the village chief for not following the law.

“They should be the role models,” he said.

The CCPO chief said that there would be no special  treatment to the law violators, especially among the government officials who were supposed to be responsible in implementing the rules and regulations in their area.

(They should be the ones showing to their constituents the right way to follow our laws.)

Read more: No city lockdown, curfew to be implemented — Labella

Assessing the viral video involving the barangay captain, he said the group had violated two ordinances which were the curfew and liquor ban.

Grijaldo said they would also be tracing where the barangay captain and his group were able to buy the alcoholic beverages as there was a total ban on the selling of these products as ordered by Cebu City Mayor Edgardo Labella.

As of this time, Grijaldo said he had tasked the Abellana Police station chief, Police Major Elisandro Quijano, to conduct further investigation on the incident, especially since the barangay captain was not jailed and there was allegedly no blotter entry about the incident./dbs