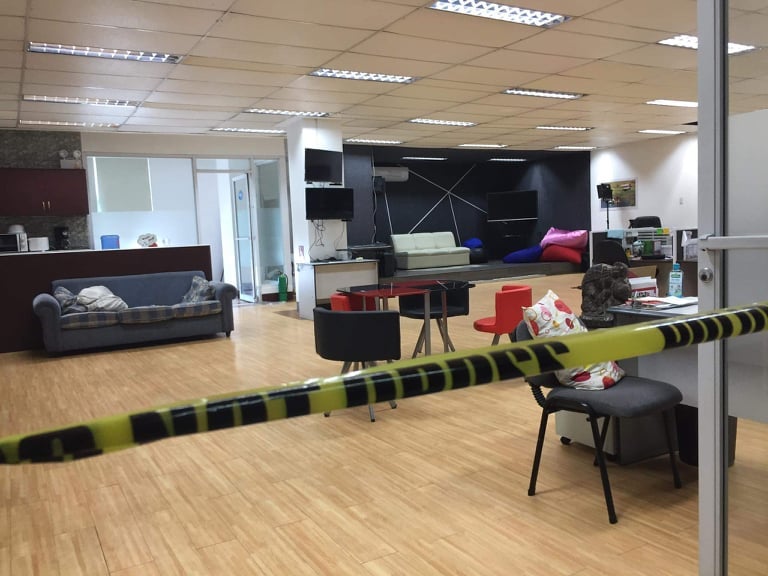 Police cordon off the CDN Digital office after burglars struck at dawn of March 27, 2020 and made off with P200,000 worth of company equipment. | Brian Ochoa

Police Colonel Hector Grijaldo Jr., Cebu City Police Office chief, made this call to the public after thieves hit the CDN Digital office at dawn of March 27, 2020 and fled with an estimated P200,000 worth of company and personal equipment.

Grijaldo said that it would be prudent for the public to be vigilant and more alert to secure their homes and properties especially at night because thieves would always wait for an opportunity to strike.

This despite the heightened security alert of the police for the coronavirus disease 2019 (COVID-19) measures.

Grijaldo said that although there were curfew and checkpoints conducted and implemented by the police, the persons with criminal intentions would not mind as long as they would see the opportunity to strike.

“You also have to secure your property. But the police will go after them, (thieves) and they will be answerable to the law,” said Grijaldo.

The CDN Digital Office is at the second floor of the Cebu Daily News building along Kaohsiung Street, Barangay Mabolo, Cebu City.

Meanwhile, Police Staff Sergeant Roy Bacus, investigator of the case, said that they would be waiting for the result of the latent prints found in the area of the incident, which belonged to the suspects.

Bacus said they were looking at two or more suspects because there were approximately 12 items — company equipment that included two laptops, a mixer and wireless microphones — that were stolen excluding several groceries.

Bacus said that the thieves were able to enter by climbing through the Old Production area, pass through an open window that exited to the office where the Circulation department used to be, climbed through the ceiling from that office and entered the CDN Digital office from there.

The thieves were believed to have exited through the same entry point in the building.

Bacus said they had already taken the statements of the security guards on duty when the burglary happened and they would conduct futher investigation based on their accounts./dbs