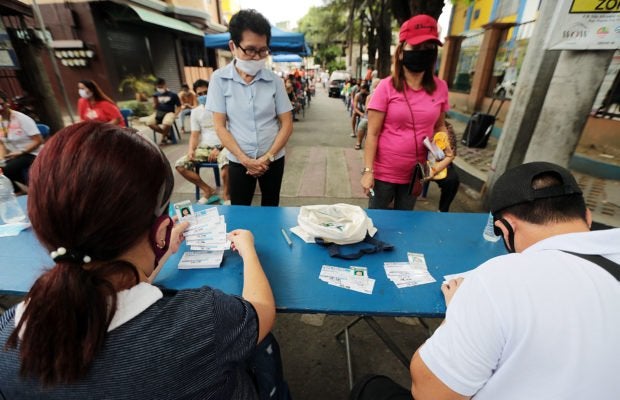 LOCAL MARKET COUPONS As the national government allots billions of pesos in aid for the poorest families and low-income workers reeling from the Luzon lockdown, some local governments with enough resources are finding ways to fill the gaps. In Pasig City, parents of public school students on Tuesday receive P400 food coupons, which they can use at selected public markets and “Mobile Palengke” outlets. —GRIG C. MONTEGRANDE

MANILA, Philippines — President Rodrigo Duterte approved a P50.8-billion wage subsidy program for workers at micro, small and medium enterprises (MSMEs) on Monday after he expressed reservations about a Senate proposal to include more than 5 million families in the government’s social amelioration program.

The cash aid will benefit some 1.6 million small businesses in the formal sector and their combined 3.4 million employees whose livelihoods have been disrupted by the Luzon lockdown.

“This is the answer to our middle-income workers,” Cabinet Secretary Karlo Nograles said on Tuesday.

“If you recall, the President ordered (Finance Secretary Carlos) Dominguez (III) and their team to study what can be given to the middle-income (earners) as benefits,” he added.

Not for middle class

But Dominguez on Monday said the financial assistance to MSME workers was not for the middle class.

He reiterated that those belonging to the middle class were already benefiting from loan moratorium, extension of tax filing and payment deadlines, and disallowing banks to charge interest on housing and credit card debts.

Nograles, spokesperson for the Inter-Agency Task Force on Emerging Infectious Diseases (IATF), said Duterte approved the proposal of the Department of Finance for MSMEs on Monday night.

The Small Business Wage Subsidy Program involves a P5,000-P8,000 wage subsidy in two tranches to be paid out in May to employees of small businesses.

In the Philippines, MSMEs are defined as businesses with an asset size of P3 million to P100 million, excluding land assets, and with less than 200 employees.

MSMEs comprise almost 99 percent of business establishments and account for 60 percent of the country’s total employment.

Nograles said the amount of subsidy would depend on the minimum wage of the region, similar to what was implemented in the P200-billion social amelioration program for 18 million poor families.

To qualify for the subsidy, the employee must have been hired as of March 1 and is no longer receiving pay from the employer.

The wage subsidy covers all employees, except those who are on leave and those who have already availed themselves of Social Security System (SSS) unemployment benefits.

Two payments in May

Nograles said the government wanted to retain the employment status of MSME workers by providing them a wage subsidy to be paid out in two tranches: from May 1 to 15 and from May 16 to 30.

Those who have already availed themselves of the P5,000 aid from the labor department’s COVID-19 Adjustment Measures Program will no longer receive the first-month tranche of the wage subsidy.

The money will be disbursed through the SSS UMID card, or through the employee’s bank account. It may also be released through a quick card, Paymaya, or e-wallet schemes, or even through money remittance.

In an IATF meeting with the President on Monday, Finance Undersecretary Karl Kendrick Chua said the disbursement of the wage subsidy would be quicker and “automated” because it would tap the data available from the SSS and Bureau of Internal Revenue (BIR).

Of 1.6 million MSMEs, 436,000 were forced to shut down while 1 million others were operating on a skeleton force. Chua said the government allowed 117,000 businesses to remain open to sell food or offer transport cargo, etc.

He said the shutdown or scaled-down operations affected 3.4 million MSME workers whom he described as belonging to low or medium middle class.

“The 2.6 million are on the BIR alpha list, which means the employers comply with the BIR submissions. So we will help them first,” Chua said.

He said the government also wanted to help the other 800,000 MSME workers, but their employers were noncompliant with BIR requirements.

In a virtual press briefing on his first day back on the job, Roque said the government would guarantee the loans of small businesses up to P60 billion to allow them easy access to credit and additional capital.

Another package is the enhanced net operating loss carryover. This means that small businesses can claim losses during the lockdown in their tax filings for a period of five years, according to Roque.

The President said the full-scale implementation of the national ID system could have hastened the distribution of the P200-billion aid to low-income families.

In a televised address aired early on Tuesday, Mr. Duterte said the government was having difficulty identifying the beneficiaries because some households were unlisted in their barangay of residence.

He, however, gave assurance to those belonging to the 18 million low-income families that the Department of Social Welfare and Development (DSWD) would reevaluate their claims so they could receive their share of the cash aid ranging from P5,000 to P8,000 a month for two months.

“We’re trying to fix the problem,” he said.

The DSWD has so far distributed P12.4 billion in cash assistance to low-income families in Metro Manila and P37.6 billion outside the National Capital Region.

In his third weekly report to Congress, Mr. Duterte practically shot down the proposal to include 5.4 million families in the government aid program, citing limited funds.

He said the Senate proposal would cover 95 percent of all families in the country and would result in an additional budget of P66.4 billion.

—WITH REPORTS FROM PATRICIA DENISE M. CHIU AND MARLON RAMOS

Read Next
The political economy of COVID-19