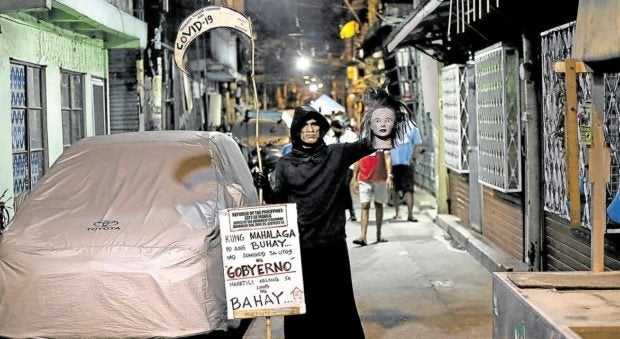 GRIM LOCKDOWN ENFORCER Angelito Miranda, a village watchman in Manila’s Sta. Cruz district, seems unable to scare residents into staying at home despite his grim reaper costume, as some of them still walk the streets behind him on Thursday night. | RICHARD A. REYES

A black hooded figure carrying what looks like a sickle, a severed head and a warning comes out exactly at 8 p.m. in a barangay in Sta. Cruz, Manila.

Barangay 344 officials have used the symbol of death to remind residents, particularly children, to stay home after the 8 p.m. curfew, or run the risk of getting infected with the new coronavirus.

Village chief Allan Yamson said that since March 15, the local version of the Grim Reaper and barangay officials walk along Rizal and Lacson Avenues, and Oroquieta, Tayuman and Herrera Streets.

An eerie music plays in the background as they remind people of the curfew.

His sickle is made of cardboard. “Instead of telling children off to stay at home, when they see the Grim Reaper, they scramble to get home,” Yamson said. —Nikka G. Valenzuela