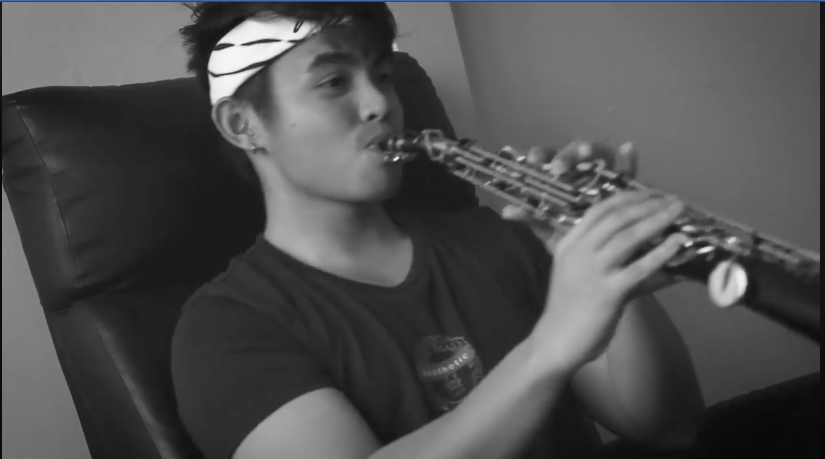 Junyne Belciña can play several instruments but he loves to play the saxophone the most. |screengrabbed from his video

CEBU CITY, Philippines— A saxophone is known for its soulful melody and its sexy tunes that is why it is dubbed as the sexiest instrument to be played.

Often than not we usually hear saxophones being played by the older generations, but this young lad from Dalaguete, Cebu sure does know how to make you feel sexy by playing this woodwind instrument.

Junyne Belciña, 22, an architectural staff learned to play the saxophone when he was still 12 years when he was influenced by his uncle.

“My uncle, Fr. Joey Belciña introduced me to those instruments,” he said.

But among those instruments, the saxophone is closer to his heart since it has helped him gain confidence and earn a little by doing gigs.

“I mostly play saxophone on particular events such as weddings or debuts; I choose to play it because it’s a unique way of giving music to people, a different level of entertainment perhaps,” Belciña added.

Belciña shares some of his clips online through his Facebook account, and just last April 29 he uploaded a new piece, “Yummy” by Justin Bieber.

“Saxophone as many people call it, “the sexiest instrument” is the reason that probably makes it stand out from any other instruments,” said Belciña.

WATCH: Let’s relax this Saturday morning as we listen to the soothing sound of this saxophone rendition of Justin Bieber’s Yummy by Junyne Belciña, a young and talented lad from Dalaguete, Cebu. | Immae Lachica #CDNDigital

He also gets his inspiration from one of the most noted saxophone players in the world, Kenny G. /dbs

Read Next
Resch, Rama back calls for temporary closure of Suba Fish Port