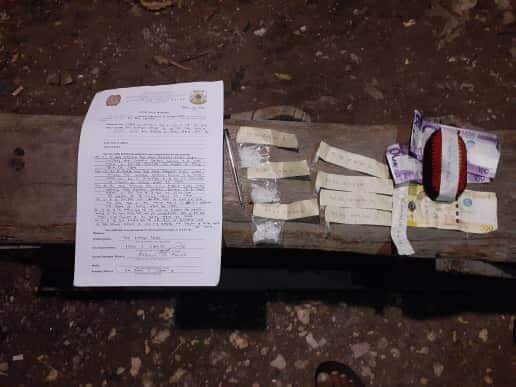 At least 15.2 grams of suspected shabu worth P103,360 were found from the possession of a high-value individual during a buy-bust in Talisay City on May 3, 2020. | Photos Courtesy of Talisay City Public Information Office Facebook page

CEBU CITY, Philippines — In a span of two hours, policemen confiscated P134,000 worth of suspected shabu in two anti-illegal drugs operation in Talisay City on Sunday evening, May 3, 2020.

Police got the biggest drug haul for the day when they arrested a security guard, Roel Estorgio Abapo, 43, of Barangay Ermita, Cebu City during a buy-bust operation that they call “Oplan Limpyo Talisay” in Sitio Kalmar, Barangay Lawaan 1, Talisay City.

Abapo was caught with 15.2 grams of suspected shabu, which had a Dangerous Drugs Board value of P103,360, said Police Corporal Marlon Savian, Talisay City Police Station desk officer, in a phone interview with CDN Digital.

Savian said that Abapo was in their list of drug personalities operating in the city.

However, he said that they still had to conduct profiling and more background checking on Abapo.

He said that they were still trying to find out how, who Abapo’s contacts were and where he got his supply of illegal drugs.

He said the confiscated drugs had an estimated DDB value of P31,620.

Abapo and Tangal were detained at the Talisay Police Station pending the filing of charges./dbs