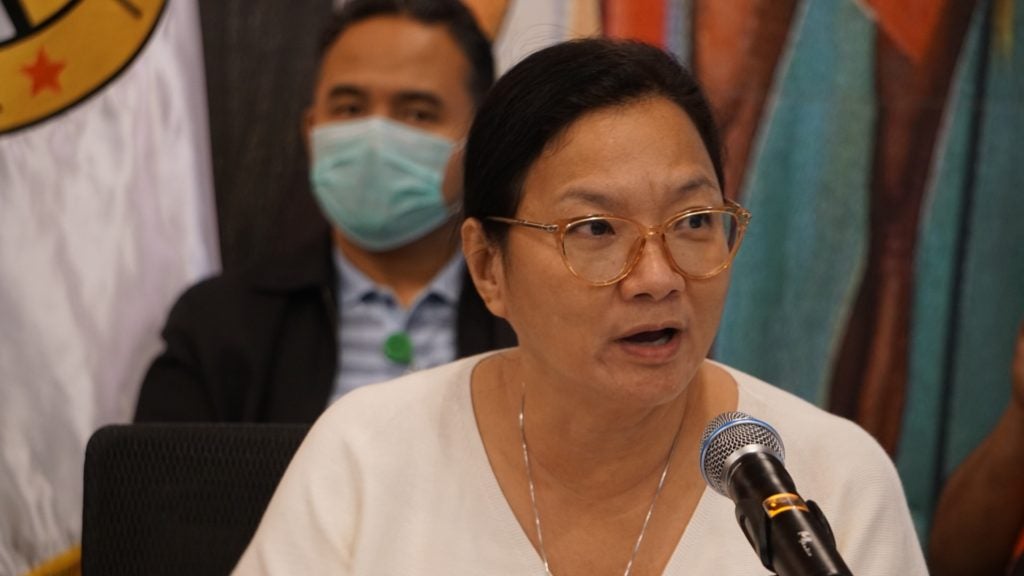 CEBU CITY, Philippines — Doctor Daisy Villa, the Cebu City Health Officer, could not hide her emotions during the Cebu City Council special session on May 8, 2020, as she attempted to clarify some false information spreading amongst the public.

First, she clarified that the information that 100 isolated patients from Barangay Luz were proven negative twice to the swab test came from the Cebu City Health Department (CHD).

She said there is no truth to this as the 14th day of the quarantine of the patients ended recently on May 4, 2020, and they prioritized the swabbing of those home-quarantined in Sitio Zapatera.

At least 60 individuals were swabbed in the sitio, but not those who were isolated in the Barrio Luz Elementary School.

“On May 7, I received a missed call from Atty. Floro Casas. I called him back and asked him why he called. He wanted me to help him with regard to his statement (in the council). He wants me to conduct a [pregnancy-like] COVID-19 test in Zapatera. I told him, dili na pwede (it cannot be), because it was the second day of our strategic rapid testing.” said Villa.

Villa said that she would not subject the residents in a test that was not approved by the Food and Drugs Association (FDA) and Research Institute for Tropical Medicine (RITM) even if she was told Casas and Councilor Raymond Alvin Garcia has vouched for the test kit.

This was not the same test kit being used in the currently ongoing rapid testing. The rapid test identifies a certain antibody present in the blood that indicates the patient has formed an immunity to the COVID-19.

Instead, she ordered a reswab for at least 69 isolated patients in the school on Thursday, May 7, 2020, that will be subject now to the Polymerase Chain Reaction (PCR) tests.

Villa said the PCR test is the only approved confirmatory test for the presence of the virus in the body.

Councilor Alvin Dizon urged the city’s executive department to be clear on the information they provide to the public.

“In the fight against this pandemic, it is incumbent for our local authorities to give accurate real-time information. In this time of public health crisis, unverified data and inconsistencies in information could create public panic and confusion and worst could cost lives. Facts matter,” said

The City Health Officer also revealed the lack of proper coordination between the Department of Health and the city with regards to the Balik Buhay project.

“In the project Balik Buhay, I was not involved in this. So I was surprised that City Health is the lead agency for the project. I asked the DOH why. It would be unfair for me, I was asked by a lot of officials, giunsa siya pagpili, unsay protocol (how they chose the test, what is the protocol). I cannot answer it because I did not know. Pero ako lang gibuhat ang tanan (I did all I can),” said Villa.

Despite this lack of coordination, Villa said she is on top of the operation and goes to all the barangay-targets to lead the extraction of the blood.

Councilor Raymond Alvin Garcia defended the project saying that a representative of the Cebu City Health Department, Dr. Michelle Linsalata, was actively participating in the meetings for the project.

He said they expected the City Health has been appraised of the project. He denied that there was a lack of coordination or preparation in the part of Project Balik Buhay.

“DOH was there. There were a lot of doctors who were there, epidemiologists, specialists. They were the ones who came up with a common decision to do what we are doing now,” said Garcia.

He added that Villa’s lack of information does not mean that the project is wrong, but only a failure in the communication of the CHD representative to Villa.

“If you can’t say something nice. If you cannot provide a plan, what are we supposed to do? What will be the basis of our decisions?” said Garcia, who went emotional during the session’s discussion.

As for the test kits, the pregnancy-like test kits were manufactured by a company in the United States (US), and this was sent to Villa for checking.

Villa discovered the test kits were not yet approved by the FDA and she told the council that the city health cannot use it.

Councilor Nestor Archival told Garcia that the council needs more information about the city’s plan to fight the pandemic.

“Everyone in the council wants to help. The problem is interconnection. We do not know what’s going on. All we know is that when there is an appropriation, we are asked to decide based on trust, and we agree. Now we don’t know where is the P15 million, where is the P1 billion?” said Archival. /rcg

Read Next
Cebu lags behind Bohol, NegOr in number of LGUs with completed SAP payout