DOH records highest number of COVID-19 recoveries in a day 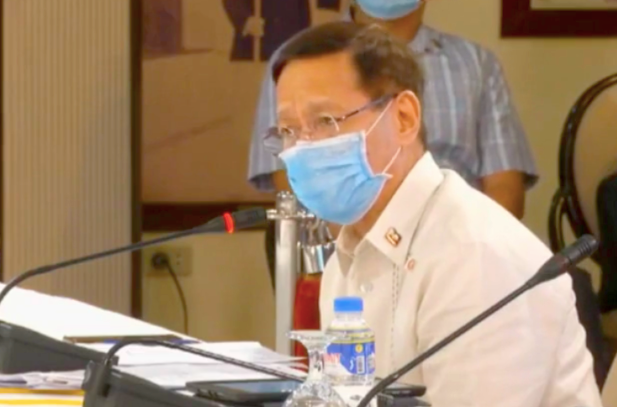 Health Secretary Francisco Duque III speaks at a briefing on COVID-19 led by President Rodrigo Duterte on April 8, 2020. (Photo from an RTVM video)

MANILA, Philippines — The Department of Health (DOH) on Wednesday recorded 145 newly recovered patients from the coronavirus disease (COVID-19), a record-high increase posted in a single day, bringing the total of recoveries to 2,251.

One hundred and sixty-five or 61% of the new cases were located in Metro Manila, while 58 cases or 22% were from Central Visayas.

The country’s death toll rose to 772 with 21 new fatalities.

The University of the Philippines (UP) COVID-19 response team earlier pointed out several supposed consistencies in the patients’ data — ranging from changes in gender to patients recorded as dead but are actually alive.

Health Secretary Francisco Duque III, however, downplayed the supposed inconsistencies, saying that these were too nominal to affect the complete statistics and decision making of the government.

“We assure the public that the issues raised are less than one percent, maliit pa sa isang porsyento [smaller than one percent] of the whole data and does not prejudice the overall data and decision making,” the DOH chief said during an online Palace briefing.

The errors were supposedly spotted from data recorded from April 24 to April 25, where 45 cases have changed genders, while at least 75 patients became either older or younger.

At least 516, meanwhile, were reclassified to a different city or location while one patient was reported dead only to be among the alive patients the next day.

Duque assured that the health department will look into the said errors and will rectify it “as soon as possible.”