‘Picture speaks for itself:’ Charges readied vs Sinas 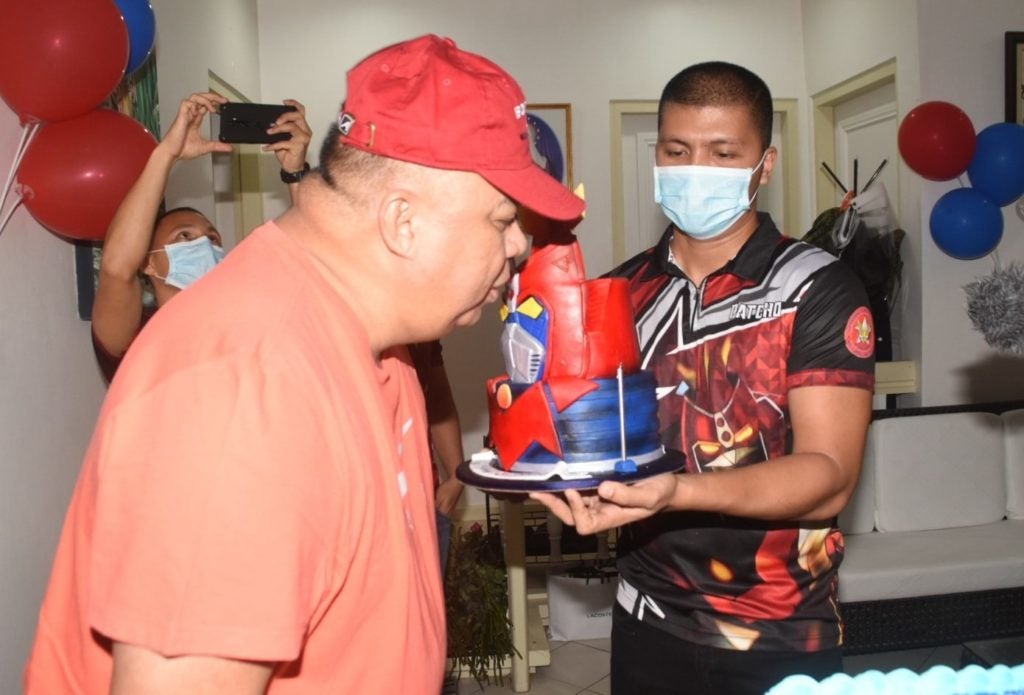 BIRTHDAY BASHED Police Maj. Gen. Debold Sinas, the Metro Manila police chief, blows candles on his birthday cake in this May 8 photo of the dawn celebration of his 55th birthday that took a bashing for allegedly violating quarantine rules against mass gatherings amid the coronavirus outbreak. Sinas apologized but insisted he and his staff had observed health measures, such as social distancing. —PHOTO COURTESY OF NCRPO PIO

Despite the looming cases, Sinas said he would wait for the results of the investigation and would not go on leave unless ordered by President Duterte or Philippine National Police chief Gen. Archie Gamboa.

Pictures of the May 8 event showed around 50 policemen gathered for the “mañanita,” the traditional dawn birthday serenade for senior police officials on their birthdays, at the National Capital Region Police Office (NCRPO) headquarters in Taguig City.

The celebration drew public rebuke and charges of double standard against Sinas and the PNP itself.

“A criminal case is now being readied to be filed tomorrow against NCRPO chief Debold Sinas, along with other senior police officials who attended the gathering,” presidential spokesperson Harry Roque said in a statement, quoting Gamboa.

Roque did not specify the charges against Sinas and other police officials present at the May 8 celebration.

The PNP will also be getting clearance from the Office of the President regarding the filing of administrative charges against Sinas because he is a “third-level officer” being a police general and a presidential appointee, he said.

Alfegar Triambulo, the inspector general of the PNP-Internal Affairs Service (IAS), told the Inquirer in a phone interview on Thursday that pictures of the May 8 mañanita allegedly showed violations of the Bayanihan to Heal as One Act and Taguig City’s ordinances pertaining to mass gatherings, wearing of masks and social distancing.

The quarantine rules are intended to prevent the spread of SARS-CoV-2, the virus that causes COVID-19, which has infected more than 11,000 people and killed 790 in the country as of Thursday.

“A picture speaks for itself,” Triambulo pointed out.

Several pictures showed a sizable number of policemen gathered around a buffet spread and several roundtables set up with Sinas and other police officials, who were not wearing face masks and in civilian attire, seated around one of them.

Sinas was photographed doing a fist bump with one policeman and another showed him blowing the candle on a birthday cake.

At least 20 photographs of the event at Camp Bagong Diwa had been taken down from the NCRPO Facebook page.

Up to PNP chief

Triambulo said the PNP-IAS would recommend the filing of criminal and administrative charges against Sinas and other officers to Gamboa on Friday.

It would then be up to the PNP chief to file the criminal charges in the Taguig prosecutor’s office, he said.

The National Bureau of Investigation, which opened a separate investigation on orders of Justice Secretary Menardo Guevarra, gave Sinas a week to explain his actions.

Catherine Remigio, chief of the NBI Anti-Graft Division, said the agency had requested Sinas to submit a written reply by May 20.

At a press briefing on Thursday, Roque said Executive Secretary Salvador Medialdea had ordered the PNP-IAS to investigate Sinas’ conduct.

“I think it’s a significant development that no less than the executive secretary has ordered the investigation and that the results be forwarded to his office. So let us allow the investigation to proceed before we talk about sanctions,” Roque said.

Sinas had apologized for the fiasco but insisted that he and his well-wishers had followed social distancing and other health protocols during his birthday celebration.

He said in an interview with CNN Philippines on Thursday that going on leave “would not be needed because I will wait for the results of the investigation” by the PNP and the NBI.

According to the NCRPO chief, there was “no double standard” in the NCRPO’s enforcement of the quarantine rules on the people outside the police camp.

Sinas said their situation was different because they were inside the police camp, and not in the streets.

“I would not be a senior officer if I did not face them,” he said in accommodating the special greetings from his staff and officers.

“They were my well-wishers and I told them to eat and then leave because we still have things to do. I don’t think there was a double standard,” he said.

Sinas was also serenaded on his birthday last year in Cebu City, where he was based as PNP chief for Central Visayas where he served from July 2018 to October 2019 before he was assigned to NCRPO.

A native of Butuan City, Sinas is a 1987 batchmate at the Philippine Military Academy of PNP Deputy Chief for Operations Lt. Gen. Guillermo Eleazar, his predecessor at the NCRPO. —WITH REPORTS FROM NIKKA G. VALENZUELA, DEXTER CABALZA, NESTLE SEMILLA AND ADOR VINCENT MAYOL