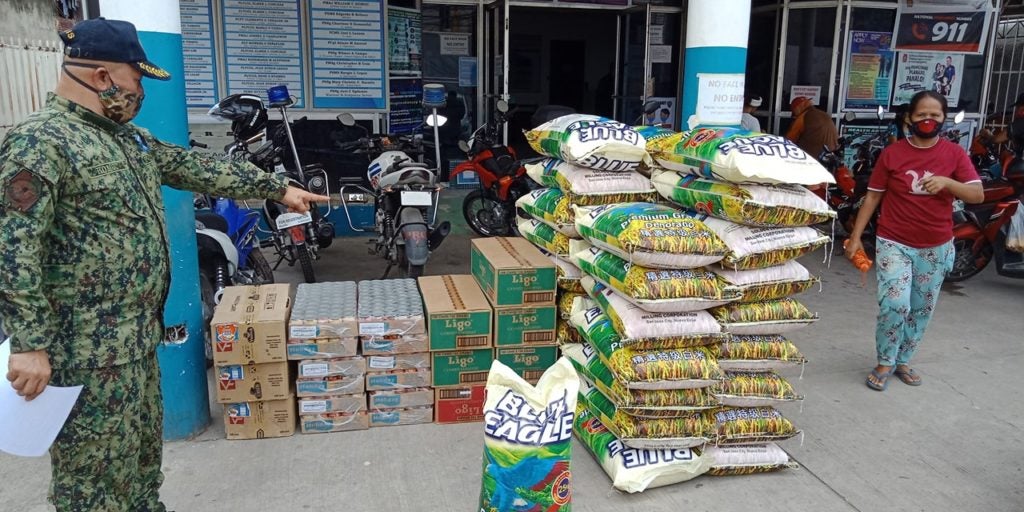 A total of 36 sacks of rice weighing 25 kilos each and boxes of assorted canned goods were donated to Minglanilla Police by a private company on Saturday afternoon, May 16, 2020. | Photos from Minglanilla Police

CEBU CITY, Philippines — “Blessed are those who give for they will be blessed by God a hundredfold.”

These were the thoughts that came through Police Master Sergeant Christoher Cesa of the Minglanilla Police Station when the police station received today, May 16, 2020, 36 sacks of rice and boxes of assorted canned goods that were donated by a private company.

According to Cesa, even with the littlest each of the personnel in the station has, still everyone was able to contribute portions of their salary to help those in need in their community. This resulted to their relief goods distribution in the community in the last two months.

Read more: Minglanilla cops have given relief goods to more than 140 families

Cesa said that the Bible verse was indeed truthful because those who had more blessings also started to share them to the other people through us.

He said the management of this company arrived in their station this afternoon bringing with them the goods which were intended for the at least 40 personnel of the station.

He said the actions were implying that the efforts of the police to help did not go unnoticed and were well appreciated.

Cesa said that the personnel of Minglanilla Police might not be one of those who needed more help, but the gesture of the private company was still a big help especially since the personnel also had families to feed.

(This way, the company also eased the burden of the families to go out and buy their basic needs.)

Cesa assured that the goods they received would also be divided so some will still be packed and distributed to the poor members of the communities./dbs