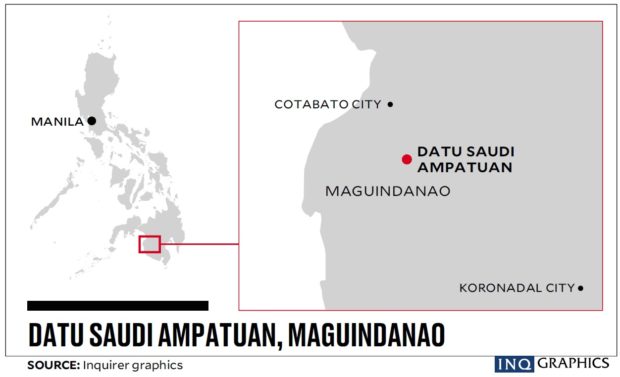 GENERAL SANTOS CITY, South Cotabato, Philippines —Days before the end of Ramadan, more than 1,000 families were forced to leave their homes in Datu Saudi Ampatuan town, Maguindanao province, after mortar shells hit their villages, a report from the Bangsamoro Autonomous Region in Muslim Mindanao (BARMM) said.

The BARMM’s Ministry of Social Welfare and Development said 1,282 families, or 6,410 residents from the villages of Daplawan, Elian, and Kitango in Datu Saudi Ampatuan, fled their communities and sought refuge in neighboring areas.

It said the shelling started after armed men, believed to be members of the Bangsamoro Islamic Freedom Fighters (BIFF), attacked three Army detachments in the villages of Elian, Madia and Salbu around 9 p.m. on May 21. The attack lasted at least three hours.

The report said mortar shelling started the next day at Sitio Bayog in Daplawan, where a 70-year-old man was hit and killed. Two days later, as Muslims were deep in their 3 p.m. prayer during Eid al-Fitr, another round of mortar shelling began at Sitio Amai Zailon in Kitango, where two children were killed.

Galvez, who is also chief implementer of the government’s national policy on addressing the coronavirus pandemic, said he was saddened by the incident that also wounded at least 15 people.

“We would like to assure our Moro brothers and sisters that we shall leave no stone unturned as we seek justice for the victims,” he said.

“I would like to appeal to the residents who have been affected by the ongoing armed conflict, as well as the leadership of the BARMM, for calmness and sobriety as authorities conduct an investigation,” Galvez added.

“[We intend] to get to the bottom of this incident and avoid making hasty conclusions pending the completion of the investigations,” Sinarimbo said.

“We will let the ‘bayanihan’ spirit work to give justice to the victims and ensure protection of the people from harm,” Sobejana said.

Read Next
Enrollment in public schools to proceed on June 1, says Palace