MINNEAPOLIS  — The Minnesota State Patrol on Friday arrested a CNN television crew as they reported on violent protests in Minneapolis following the death of George Floyd, a handcuffed black man who pleaded for air as a white police officer kneeled on his neck. 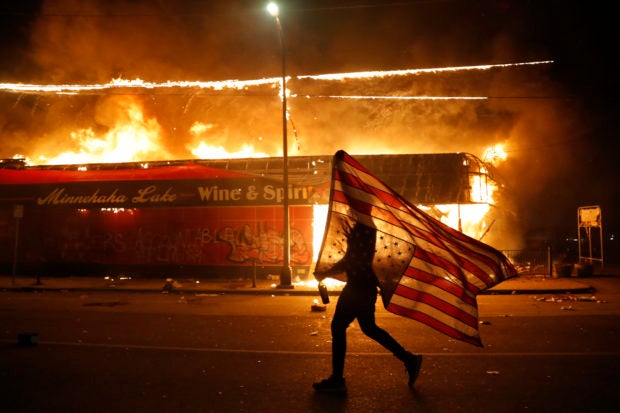 A protester carries the carries a U.S. flag upside, a sign of distress, next to a burning building Thursday, May 28, 2020, in Minneapolis. Protests over the death of George Floyd, a black man who died in police custody Monday, broke out in Minneapolis for a third straight night. (AP Photo/Julio Cortez)

While live on air, Jimenez was handcuffed and led away. A producer and a photojournalist for CNN were also led away in handcuffs.

CNN’s communications team earlier said on Twitter that the crew was arrested “for doing their jobs, despite identifying themselves — a clear violation of their First Amendment rights.”

The Minnesota State Patrol said on Twitter that the journalists were among four people arrested as troopers were “clearing the streets and restoring order.” The patrol said they “were released once they were confirmed to be members of the media.”

Late Thursday in Minneapolis, cheering protesters torched a police station that the department abandoned as three days of violent protests spread to nearby St. Paul and angry demonstrations flared across the U.S.