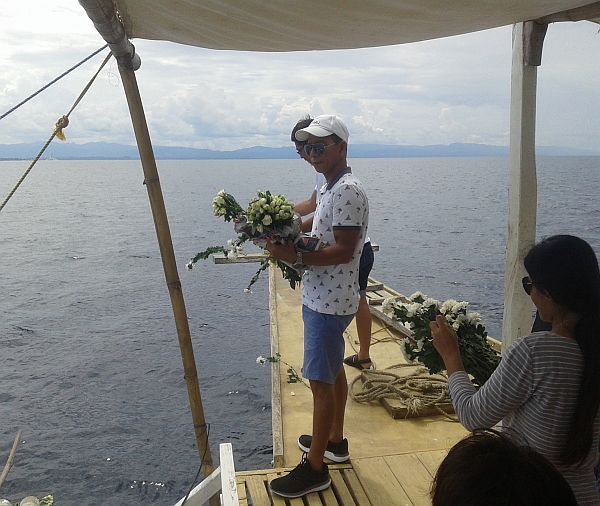 In this June 2017 photo, the siblings of Bien Unido Mayor Gisela Bendong-Boniel from Iligan City and Cavite travel to the sea between Cebu and Bohol where her body was believed to have been dumped to offer flowers, light candles and pray that her remains can soon be found.
CONTRIBUTED PHOTO

As the family marked her third death anniversary last Sunday, June 7, 2020, Gisela’s sister, Merlita Bendong, called on former Bohol Board Member Niño Rey Boniel, who is Gisela’s husband and the prime suspect behind her death, to already “confess” and admit to authorities about what happened to her sister three years ago.

“You know what you did to Gisela. Why don’t you confess, why don’t you admit it? Don’t you have any conscience left?” Bendong said in a statement.

CDN Digital tried to reach the camp of Niño Rey Boniel through his legal counsel, Lawyer Gerardo Carillo, but the latter has not yet responded as of press time.

Bendong said their family still mourned the loss of Gisela, who was also a pilot, and “remember her every day, including the brutality of her death.”

“It has been 3 years since the merciless killing of Gisela. We remember her every day, including the brutality of her death. May we achieve justice soon. We trust our lawyers, and we trust the justice system will make it happen. We sorely miss her,” she said.

Niño, who has been detained at the Cebu Provincial Detention and Rehabilitation Center (CPDRC) since January 2018, is facing charges of parricide over Gisela’s presumed death; and serious illegal detention and kidnapping for allegedly holding Gisela’s best friend, Angela Leyson, and her son, who was a minor at the time, inside a resort in Bien Unido, Bohol.

Last November 2017, the high court granted the request of Justice Secretary Vitaliano Aguirre and the prosecution camp to transfer the kidnapping and serious illegal detention cases against Niño from Bohol, which has jurisdiction over where the alleged detention took place, to Cebu.

Police investigations said Leyson’s statements claimed that a group of men barged into the resort where she and Gisela were staying at dawn on June 7, 2017.

As she took the witness stand for the illegal detention and kidnapping case against Niño, Leyson said that she herself was physically assaulted by some of the men, who entered the room. She claimed that one of the men went to the bed where the mayor was and started punching the mayor.

During the August 1, 2019 trial, Leyson identified Niño as the man who allegedly punched Gisela, and whom the mayor addressed as “In-in” who is Niño’s nickname.

The parricide case against Niño is also pending at the Lapu-Lapu City Regional Trial Court, which has jurisdiction over the part of the sea where Gisela’s body was reportedly dumped./dbs