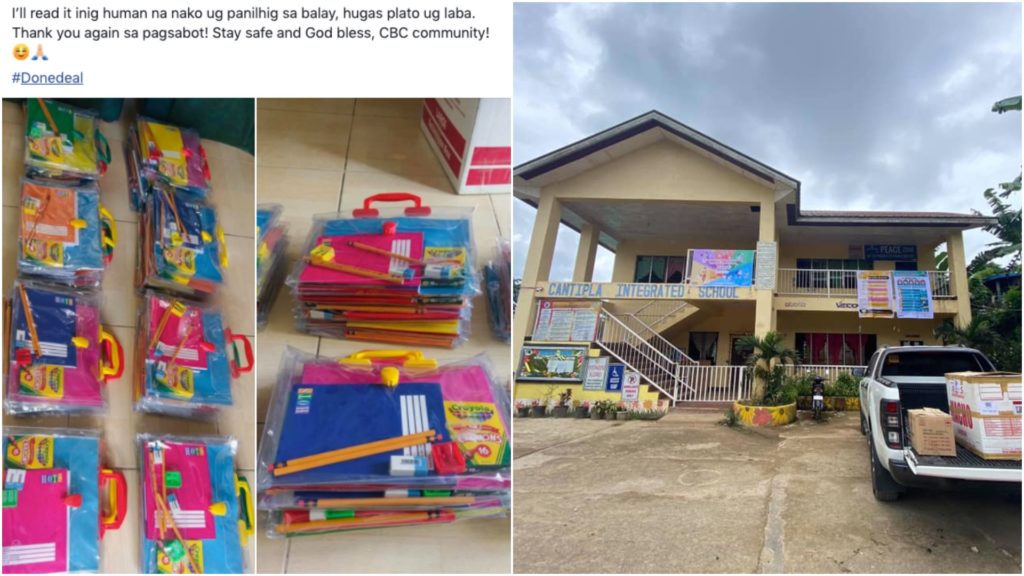 MOALBOAL, Cebu —Lan Alyxandre Cabatingan bought school supplies which he planned to give out to children in one of the public elementary schools in Cebu City before he left for Las Vegas on January 21.

But his plan did not materialize because of government restrictions to prevent the spread of the coronavirus disease 2019 (COVID-19).

Cabatingan, a nurse who is now based in Las Vegas, Nevada, found another recipient for his scchool supplies after he posted about his donation offer on the Cebu Barter Community Facebook page.

From among the more than a hundred individuals who responded to his offer for donation, Cabatingan said he was most touched by the message that was sent by teacher Angielyn Itao of the Cantipla Integrated School that is located in the mountains of Cebu City.

(Her comment was exactly what I was looking for.)

Cabatingan, 27, said that pupils at the Cantipla Integrated School also reminded him of the pupils that his grandmother, who is also a public teacher, used to teach.

(I was reminded of the children that my grandmother used to teach in OPRAH.  We used to visit her there and we would see the difficulties that her students were going through.)

Cabatingan’s donation was intended for grade 1 pupils. It included art materials, notebooks, pencils and sharpeners that were placed on plastic envelopes.

On Monday, June 8, he sent his friend, Renaire Lopez, to deliver the donation to the elementary school that is located 45 minutes away from the city proper.

In 2017, Cabatingan said he also gave a donation of school supplies to the students of Pulang Bato Elementary School in Cebu City as his way of giving back to the community.

Itao told CDN Digital that the faculty of Cantipla Integrated School is very grateful for the donation of school supplies that will aid their learners, most of whom come from poor families.

(We, the teachers in Cantipla are very grateful because there are still people who are prepared to help the children who are located in far-flung barangays in the city.) / dcb