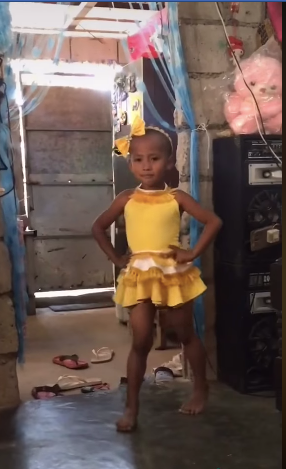 A video of John Arvie Reye Po which he shared on his social media page also created waves online.

Lim, who has been a pageant coach for 10 years, said that aside from the good vibes Po shared online, she was impressed with the confidence and how this young boy carried himself with the short pasarela performance.

“At his age, he performed such cute pasarela. I love the confidence and the facial expression,” she said.

But considering the young age of Po, Lim said that some changes were bound to happen with this young boy’s performance in the coming years.

“I can see that he is really good at it and very passionate,” she added, saying that the boy clearly had the potential to be up on the big stage one day.

Queen Leo is the uncle of Po.

And on June 16, Lim uploaded the video on her Facebook account which then garnered so much online attention.

Lim also added that according to Queen Leo the parents of the young boy had been very supportive when it would come to Po showing his runway skills.

This also touched Lim’s heart as she remembered how her parents were also very supportive of her growing up as a member of the LGBTQI community.

“I posted it and name “new assistant” because I love his pasarela at a very young age. Aside from we are celebrating LGBTQI month  I can’t stop smiling upon watching the video parang it brought me back to when I was a kid when my family never discriminated me and accepted me,” said Lim.

To John Arvie Po, keep doing what you want and never forget to love who you are and grow as a responsible member of the community and a responsible child to your parents. /dbs

Watch Po as he struts his pasarela moves online.