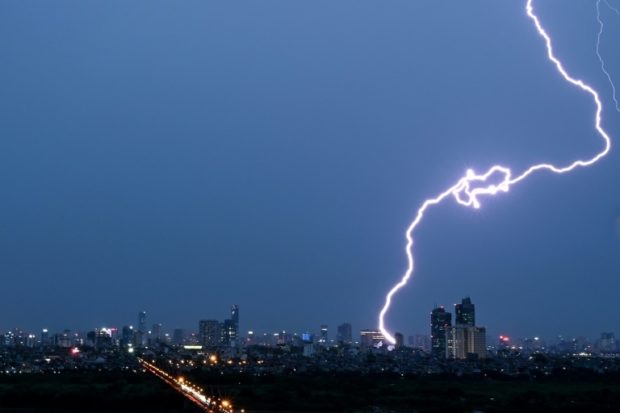 The United Nations’ (UN) weather agency announced Thursday the longest lightning bolt on record — a single flash in Brazil on Oct. 31, 2018, that cut the sky across more than 700 kilometers.

That is equivalent to the distance between Boston and Washington DC in the United States, or between London and Basel, Switzerland, the World Meteorological Organization (WMO) said in a statement.

WMO’s committee of experts on weather and climate extremes also reported a new world record for the duration of a lightning flash, with a single flash that developed continuously over northern Argentina on March 4, 2019, lasting for a full 16.73 seconds.

The new “megaflash” records, which were verified with new satellite lightning imagery technology, were more than double the previously known record-holders, WMO said.

The previous record for the longest detected distance for a single lightning flash was 321 kilometers (199 miles), measured on June 20, 2007, in the U.S. state of Oklahoma, WMO said.

The previous duration record was 7.74 seconds, measured on August 30, 2012, in southern France, it said.

“It is likely that even greater extremes still exist, and that we will be able to observe them as lightning detection technology improves,” he said.

The previous records were assessed using data collected by ground-based so-called lightning mapping array networks, which many lightning scientists acknowledge face upper limits in the scale of lightning that can be observed, WMO said.

This has allowed for the detection of “previously unobserved extremes in lightning occurrence, known as ‘megaflashes,’” Michael J. Peterson, of the Space and Remote Sensing Group of Los Alamos National Laboratory in the U.S., said in the statement.

Megaflashes, he said, “are defined as horizontal mesoscale lightning discharges that reach hundreds of kilometers in length.”

The UN agency occasionally reveals quirky weather-related milestones, like in 2016 revealing a record wave measurement of a behemoth that towered 19 meters (62.3 feet) — taller than a six-story building — above the North Atlantic.

All such records are stored in the WMO Archive of Weather and Climate Extremes.

One is for the most people killed by a single direct strike of lightning when 21 people died in Zimbabwe in 1975 as they huddled for safety in a hut that was hit.

The other is for an indirect strike, when 469 people died in Dronka, Egypt when lightning struck a set of oil tanks in 1994, causing burning oil to flood the town.  /CL

Read Next
Cebu City sets up ‘stricter measures’ for ECQ