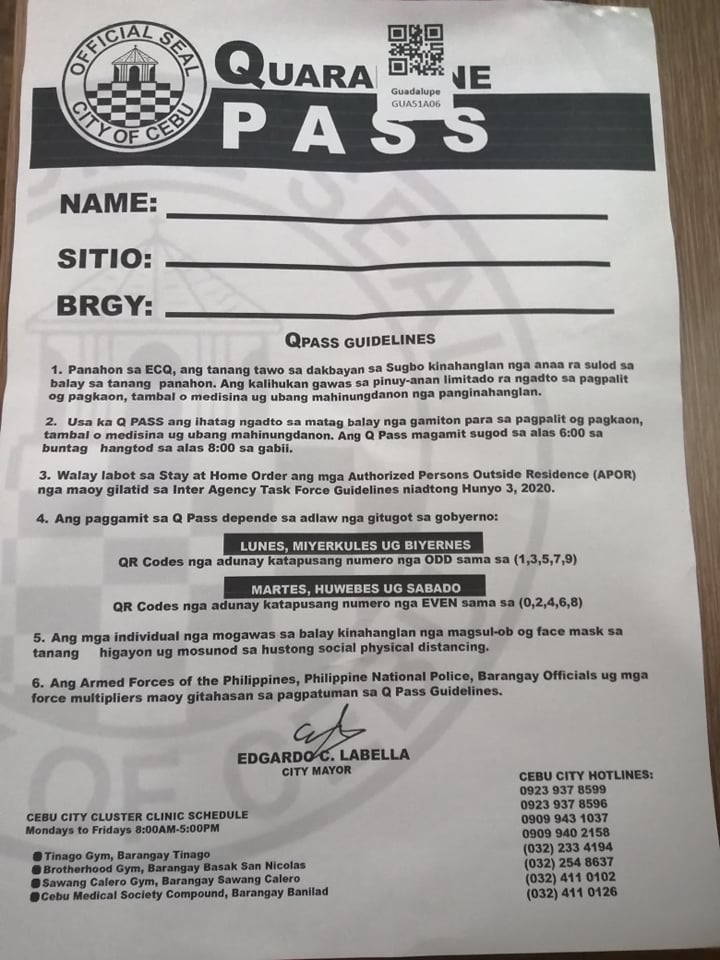 A sample of the new QR-coded Enhanced Community Quarantine pass in Cebu City.

He said that the city government had already explained that due to the lack of time, the materials used for the QR coded passes had varied.

On July 1, 2020, city residents took to social media their frustrations that their barangay-issued QR coded passes were confiscated by the police because the sticker used in the QR code was not glossy.

Casas said that glossy sticker QR codes were not the basis of a real QR pass because the city used two different sticker papers, glossy and non-glossy.

The disparity was caused by a simple reason, that the city government did not wish to spend much on the passes and used the most available sources. When the glossy stickers ran out, they used non-glossy ones.

(If you noticed, our QR passes are huge and they look cheap. That is because we did not have time to cut them to a smaller sizes. We did not want to spend much, so we used cheap paper and for the ink, we utilized what was available at the City Hall.)

Casas also said that the basis of a real pass would be the QR code, the name of the barangay, sitio, and the head of the household or name of the residential complex.

There is no special material used in the ECQ passes that would constitute its being genuine except for the stickered QR code.

With this, the city government allows the barangays to place additional foolproofing to the passes such as barangay stamp or the village chief’s signature to further ensure the validity of the QR coded passes.

“It’s not really mandatory, but we welcome that. That is also a way for the barangays to foolproof the passes if they add an additional feature. They can just inform the police of such,” said Casas.

The city administrator reminded the public that the limited QR passes were a way to limit the movement in the city.

He said that a pass is not a full-proof guarantee of free movement around the city. It should be used only for buying necessities like food or medicine, and for emergencies.

Still, he assured the public that the issues had been resolved with the police, but he also warned against counterfeiters.

Holders of passes proven to be fake will face the legal consequences such as counterfeiting and falsification of documents./dbs