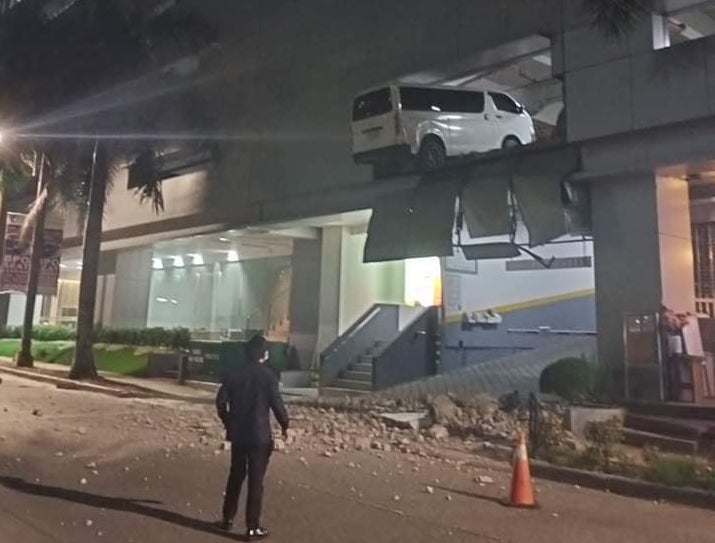 Half of a van hangs off a parking floor of a building at the Cebu IT Park in Cebu City in this photo courtesy of a netizen who requested anonymity.

Cebu City, Philippines—A netizen was able to take photos of a van hanging dangerously out from a second-level parking area of a building at the Cebu IT Park in Barangay Apas here.

The netizen, who requested anonymity, posted the photos on his Facebook account on Wednesday night, July 8, 2020. It has since been shared 5,000 times as of 10 p.m.

The photos show half of a white Toyota van dangling out from the building. One photo also showed that there were debris on the ground outside the building, which suggests that the van may have crashed through the wall of the parking floor of the building.

But the police didn’t receive any report about the incident.

Police Corporal Michael Puerto of the Mabolo Police Station, which has jurisdiction over the area, said no one called to report the incident.

When learning about the incident through CDN Digital, they sent a team to check, but when they arrived the area, the van wasn’t there anymore.

They were told that security personnel of the building already secured the area and the van.

Puerto said that should this happen again, he urges the management of the building to report to the police immediately so they could help.

He also said reminded drivers to take extra precautionary measures even when it only involves parking. /bmjo

Read Next
Central Visayas has 8.7K dengue cases since January