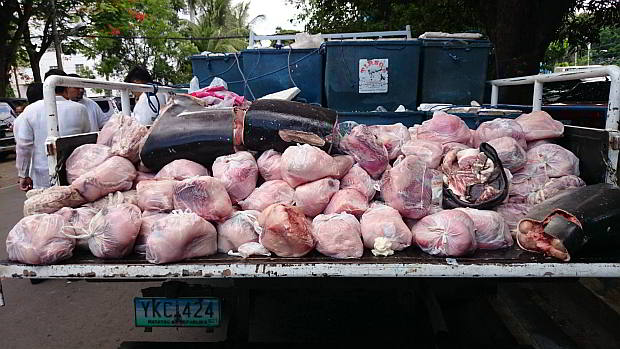 Frozen bags of shark meat and other fish are intercepted in Naga City. The truck belongs to Tirso’s Fish Food Product based in Lapu-Lapu City, where the delivery was heading. (CONTRIBUTED PHOTO/ GARY CASES)

Are you fond of street food like fried fish balls and seafood tempura?

If so, chances are, you’ve tasted shark meat.

A truck containing chopped bodies of at least 14 thresher sharks was apprehended Wednesday night in Naga City bound for a seafood processor plant in Mactan.

Close to 470 kilos of frozen white shark meat in plastic bags were  recovered  by a team from the Cebu Provincial Anti-Illegal Fishing Task Force, which was tipped off about the cargo.

The truck’s side door identifies the name of the company and its products: “tempura, squid ball, squid roll, kikiam and fish ball.”

A 2012 Cebu province ordinance makes it illegal to  capture, kill, transport or sell thresher sharks, which is listed as a “vulnerable” species in the International Union of Conservation of Nature (IUCN).

Shark diving is also a major tourist attraction in Malapascua island, north Cebu where thresher sharks can be found almost daily in the Monad Shoal, attracting divers from around the world.

Called in to inspect the cargo, diver and marine biologist Gary Cases confirmed that the meat was from thresher sharks. 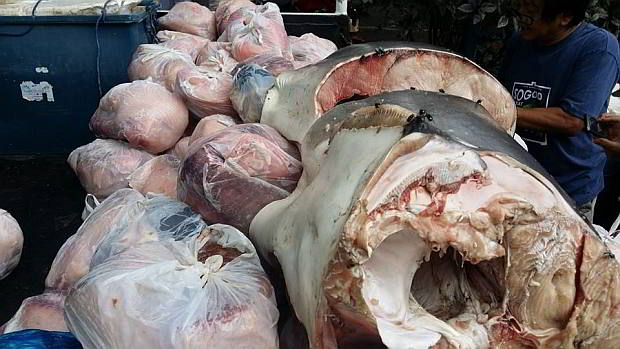 From the large size of the skins and meat cuts, Cases said he suspects they are two of three species of thresher sharks – Alopias pelagicus and Alopias vulpinus.

Cases has been involved for several years in an international research project on the conservation of thresher sharks in collaboration with Dr. Simon Oliver of England.

Aside from the meat in packs, the truck carried large pieces of shark skin, possibly the supplier’s way to establish how many sharks were harvested.

“From the individually packed skins I counted 13, plus the big torso, 14 sharks in all,” said Cases.

The meat, packed in clear plastic bags, was placed under blue plastic boxes of other fish varieties, a ruse to conceal it from plain  view, said Madrigal.

“I didn’t know that shark meat was being used for fishballs,” said a surprised Gov. Hilario Davide III.

He said Capitol lawyers will review what legal action can be taken against the parties.

Representative of the truck owner went to the Capitol past 2 p.m. to talk to the raiding team, but Madrigal said the case was now up to the provincial legal officer Orvi Ortega.

Charges are expected to filed today for violation of the  Cebu ordinance. Madrigal said the shark meat was buried in an empty lot in the Cebu provincial jail while the remaining fish was given to the jail for the inmates’ consumption.

The truck remains parked in the Capitol. The driver and his two companions are detained in the Naga police office.

A checkpoint was set up in Poblacion, Naga city after a source tipped off  authorities about the truck which was making its way to Mactan Island from the neighboring province of Negros Oriental.

The driver, Allan Empinado, said the fish meat was loaded in Siaton town near Dumaguete City in Negros Oriental.

The driver nd his companions Daniel Amistoso, 61, and Gerry Atillo, 24, confirmed that the meat was intended as an ingredient for making fishballs and tempura, he said.

At the checkpoint, the driver showed a Local Transport Permit issued by the Bureau of Fisheries and Aquatic Resources in the region (BFAR-7) for the transport of “barla” fish.

“When we told him that we wanted to check the contents at the back, he told us it’s the same fish. That raised our doubt,” said Madrigal, who said the driver could also be lying about the origin of the fish.

“There’s a big possibility the sharks really came from the south since the driver was able to lie about the contents of the truck,” he added.

The protection of thresher sharks from “hunting, capture, killing or sale” is included in a 2012 Cebu provincial ordinance.

The Provincial Fisheries and Aquatic Resources Ordinance also bans the capture and sale of whale sharks, giant manta rays and sun fish. An amendment is being proposed to include hammerhead sharks, of which three species were recently declared endangered species by international conservation groups.

Madrigal said the ordinance also bans the transport of the endangered marine species in any parts of the province.

A case for violation of Republic Act 8550 or the Philippine Fisheries Code of 1998 may also be filed.

With shark meat being sold for P50 to P70 per kilo, Madrigal said it’s cheaper material for seafood processors to make into fish balls.

He said the workers told them the fishball brand for the cargo was even sold in supermarkets.

The thresher shark is a type of mackerel shark or Lamniformes.

The threshers grow to a length of five to six meters. It’s long scythe-like tail is almost half the length of the shark itself.

According to Cases, most fishermen use a hook and line to catch the sharks using small fish as bait.

Cases said its possible the threshers confiscated in Naga were sharks that had been swimming in Cebu waters. To check this, he got  tissue samples of the recovered meat to be sent to a laboratory in England for DNA testing.