This, as the Land Transportation Franchising and Regulatory Board in Central Visayas (LTFRB-7) will already deploy these public utility vehicles (PUVs) to fixed routes within areas under general community quarantine (GCQ) and modified GCQ.

Retired Colonel Eduardo Montealto Jr., regional director of the LTFRB-7, said it is not a part of the nature of these PUVs to serve as shuttle services but were only allowed to engage in the set-up since Cebu City is under an enhanced community quarantine (ECQ), which means that public transport is not allowed in the area.

Montealto told CDN Digital via phone that the tourist transport services sector will take over the shuttle services operations instead. 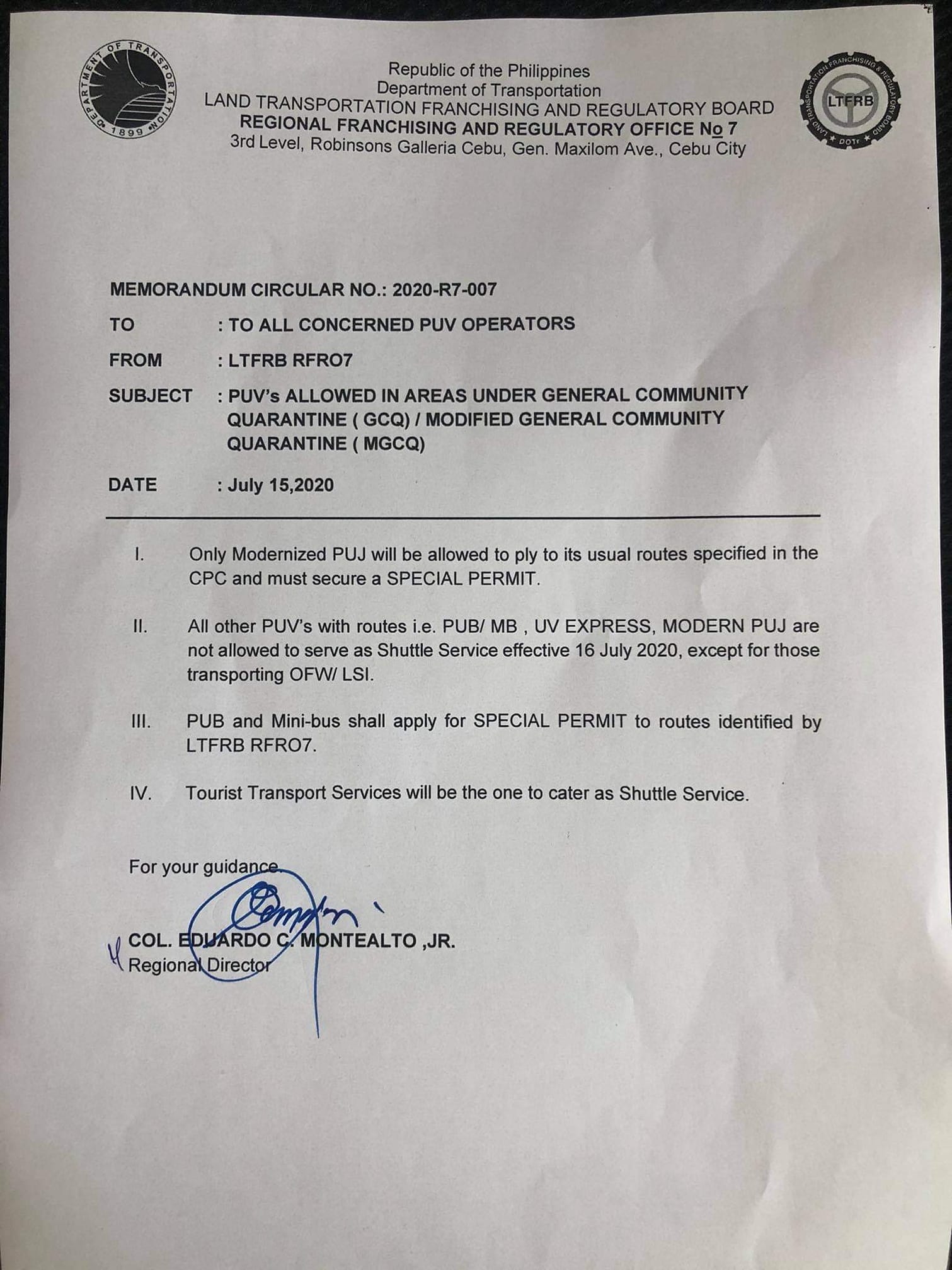 Memorandum Circular no. 2020-R7-007 on PUVs allowed to operate in areas under GCQ and MGCQ.

According to the MC, the modern jeepney units will be allowed to ply their route specified in their Certificate of Public Convenience (CPC) and their special permit that will be issued by the LTFRB.

As for the buses, minibusses, and UV Express, Montealto said they will be issued with a special permit to ply routes that are set by the LTFRB-7 in order to meet the transportation demand in the areas under GCQ and MGCQ.

In Cebu province, where most of its parts are under MGCQ, Montealto said his office was able to release 620 special permits to buses, mini buses, and modern jeepneys.

If Cebu City, which is under ECQ, will be downgraded to GCQ, Montealto said the 210 buses that were previously deployed to ply the tri-city will already be allowed to enter and ply Cebu City again.

At present, the buses allocated in the tri-city, or the cities of Cebu, Mandaue, and Lapu, are limited to plying around the two other cities since Cebu City is still off-limits to public transport.

The LTFRB-7 director warned the PUV operators to heed the order otherwise penalties will await them.

From July 1 to 15, the LTFRB fined 5 units of buses that operated as shuttle services using their special permit to operate that supposedly directs them to operate as a public transport vehicle for the Danao City -to-Mandaue City route.

“We were wondering why there are still complaints of lacking buses when we have already issued several special permits, then we found out that there were buses that still engaged in shuttle services. They have a fixed route but they will not admit passengers who are not employees of the company that they are servicing as shuttles,” Montealto said.

A P10,000-fine await for PUVs that continue to operate as shuttle services when they are caught for the first time; P10,000 for the second offense; and P15,000-fine and suspension or revocation of its franchise in the third offense.

Montealto said they are paying close attention to complaints from the public on erring PUVs, “which most often are proven true.” /bmjo

Read Next
IATF to strengthen coordination with barangays in Cebu City