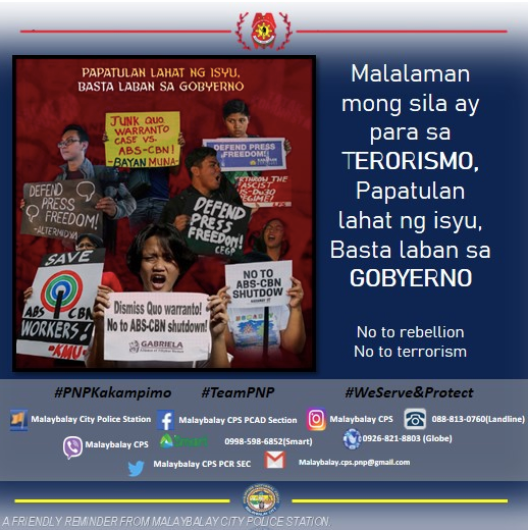 An infographic developed and disseminated by the Malaybalay City police station in Bukidnon province depicts press freedom campaigners as rebels and terrorists. The material was posted on Facebook on July 15 and was taken down on July 16 after it generated controversy. PHOTO FROM MALAYBALAY POLICE FACEBOOK PAGE

CAGAYAN DE ORO CITY——-The police are at it again.

The police station of Malaybalay City in Bukidnon province has put out an infographic on Thursday (July 16) that depicts people who campaign for press freedom and the continued operation of media giant ABS-CBN as rebels and terrorists.

Aside from posting on its Facebook page, the Malaybalay police also circulated the material in the Viber group of reporters covering the Northern Mindanao police command based in Camp Alagar here.

By Friday morning, the infographic gained the attention and drew flak from journalists, especially among those assigned to cover the regional police.

The post was taken down from Facebook and Viber around 11 a.m. on Friday, and the Malaybalay police chief has apologized for the controversy.

Another three pertains to the call against the shutdown of ABS-CBN, with two, mentioning the quo warranto case, by party-list groups Gabriela and Bayan Muna. A Kilusang Mayo Uno (KMU) placard was also shown with the message, “Save ABS-CBN workers!”

Still another placard was by the League of Filipino Students (LFS), with its message, partly hidden, calling for the overthrow of the “fascist Du30 (Duterte) regime.”

The collection of images is wrapped with the message “Malalaman mong sila ay para sa Terorismo; Papatulan lahat ng isyu; Basta laban sa Gobyerno. No to rebellion. No to terrorism.”

(You will know they are for terrorism; they will ride on all issues; especially if it is against the government.)

The infographic further said that the message is “a friendly reminder from the Malaybalay City police station.”

Because of the controversy generated by the material, the top police leadership has directed the Malaybalay police chief to explain the matter, Lt. Col. Silvestre Asiong Jr., Bukidnon police spokesperson, told the Inquirer on Friday.

In a separate interview, Lt. Col. Jerry Tambis, Malaybalay police chief, said one of his officers was responsible for the infographic.

“One of my men did it, and has already apologized for what happened,” Tambis said.

Tambis said that there was no intent to malign ABS-CBN, saying the infographic was intended to show the workings of “left-leaning groups who use a variety of issues to criticize the government.”

Tambis added that the infographic, which was posted on regional police’s Facebook page, was not an original but was shared from another social media account and edited by his men.

He said the regional police command called him up and ordered him to remove the post shortly before noon on Friday.

“We made a mistake and we are sorry for it,” Tambis said.

Last month, one station of the Butuan City police came out with an infographic depicting activists as terrorists.