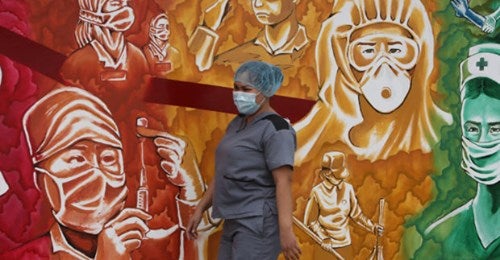 MANILA, Philippines — It took nearly two decades before nurses working in public hospitals and government agencies got the pay hike that a law had provided, and it came amid the COVID-19 pandemic.

Budget Secretary Wendel Avisado on Friday issued Budget Circular No. 2020-4, which finally implemented Section 32 of Republic Act No. 9173, or the Philippine Nursing Act of 2002, which gave nurses a minimum monthly base pay of Salary Grade (SG) 15 amounting to P32,053 to P34,801 in state-run health institutions.

Prior to this circular, entry-level government nurses were paid SG 11 rates, or P22,316 to P24,391 per month, depending on the salary step, under the Salary Standardization Law (SSL) 5 which raised the pay of civilian government personnel since Jan. 1 this year.

Camille Ayap, 30, who started working as a contractual nurse at a public hospital in Nueva Ecija province last January, expected to be among them.

“I’m really happy and thankful. It’s not bad, considering that the government’s budget is also limited, and we have this unprecedented COVID-19 pandemic happening,” Ayap told the Inquirer.

The bigger pay “will really help me and my family,” the mother to a 9-year-old daughter said.

Ayap took and passed the nursing board exam only last year, 10 years after graduation as she had to take care of her growing child.

Her “job order” position paid a measly P505 per day, or P11,000 a month, and she didn’t have benefits like those enjoyed by tenured nurses.

The plight of overworked and underpaid nurses in the Philippines is again in the spotlight as the COVID-19 pandemic sweeps across the country.

Among the first casualties of the new coronavirus disease were health workers, many of them nurses.

In Cebu City, where a surge in COVID-19 cases was reported last month, many overworked and demoralized nurses complained of lack of government and private sector support and threatened to leave their jobs.

Joseph Stephen Descallar, president of the Cebu chapter of Philippine Nurses Association (PNA), said many nurses in the city wanted to quit for “fear of the unknown” on top of the absence of hazard pay in private hospitals and delayed payments in government hospitals.

In Manila, the local chapter of Filipino Nurses United at the government-run San Lazaro Hospital last week reported that medical front-liners, including nurses, were suffering from “physical, emotional and mental” stress.

It said 40 of San Lazaro’s personnel had tested positive for the coronavirus.

The nurses cited the shortage of personal protective equipment (PPE) and complained of being instructed to reuse PPEs even after 12-hour shifts and for not being given sufficient support in terms of transportation, accommodation and stress debriefing.

The hospital management acknowledged the 40 infections and said the complaints had all been addressed.

Avisado said the Department of Budget of Management (DBM) circular “shall take effect immediately” and those in nurse 1 positions will now start to get SG 15 salaries.

The upgrading of the pay grade was “effective not earlier than Jan. 1, 2020,” according to the circular.

Avisado and other DBM officials did not immediately reply when asked whether the nurses could get back pay.

A study by the Philippine Nurses Association (PNA) in 2017 showed that there were 31,396 nurses in 800 public hospitals that year. In addition, 23,547 worked at various community health centers and another 35,365 were employed in 1,172 private hospitals, the PNA said.

On June 17, Ang Nars party list, which had petitioned for the implementation of Section 32 of RA 9173, said in a statement that the Supreme Court released the finality of judgment of its ruling last year upholding its validity.

The high tribunal last year said that former President Gloria Macapagal-Arroyo’s Executive Order No. 811 in 2009 setting SG 11 as the minimum salary grade for nurses could not overturn the Nursing Act.

Avisado said in the circular that the Supreme Court decision became final and executory on Dec. 13, 2019.

Then Senior Associate Justice Antonio Carpio, who authored the ruling, said Section 32 of RA 9173 was valid, but it did not grant Ang Nars’ petition to order its implementation because enforcing the minimum salary “would require a law passed by Congress providing the necessary funds for it.”

According to the DBM circular, the salary adjustment covered “all nurse positions, whether regular, casual, or contractual in nature, full-time or part-time.”

The pay hike will not apply to nurses in government agencies and GOCCs whose salaries were exempted from coverage of RA 6758 and were instead covered by Republic Act No. 10149, or the GOCC Governance Act of 2011, as well as “nurses hired without employee-employer relationship and funded from nonpersonnel services appropriations/budgets.”

According to the DBM, “the salaries of the incumbents of nurse 1 positions will be adjusted at the same salary steps as those of the previous SG allocation of their positions.”

The new salary rates will be based on SSL 5.

“If supported by sufficient funds, the salaries/wages of contractual/casual nurse 1 positions may be adjusted to step 1 of SG 15 of the applicable salary schedule,” the DBM said. Each salary grade has eight steps.

Their monthly salaries range from P38,464 to P41,789 for SG 17 to P85,074 to P96,283 for SG 22. In the case of national government agencies, the amounts required to implement the salary upgrades would be charged against “their available released personnel services allotments.”

If these were not enough, the affected agency may request the DBM to release funds chargeable against the MPBF under the 2020 GAA.

For GOCCs, the money will be charged against their respective approved corporate operating budgets.

Local government must use their own funds, “subject to the personnel services limitation” in their budgets, and the funds have to be provided in the respective appropriations ordinances of the Sangguniang Panlalawigan, Sangguniang Panlungsod or Sangguniang Bayan. —WITH A REPORT FROM JOVIC YEE