LAKE BUENA VISTA, Florida  — CJ McCollum scored 33 points, teaming with Damian Lillard for 11 of Portland’s 16 in overtime, and the Trail Blazers pulled out a desperately needed victory to resume their season by beating the Memphis Grizzlies 140-135 on Friday. 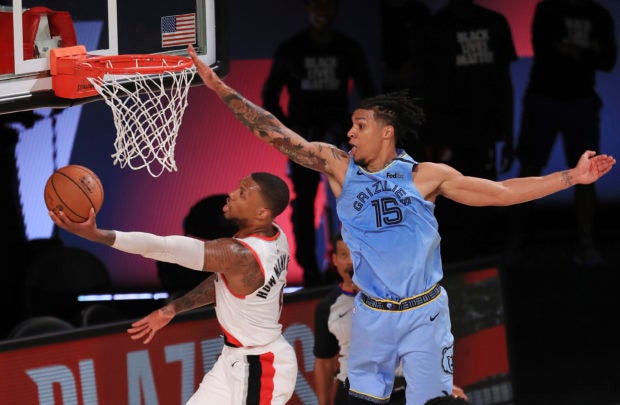 Lillard finished with 29 points and nine assists to help the Trail Blazers boost their hopes for a seventh consecutive playoff appearance. Carmelo Anthony added 21 points as Portland moved within 2 1/2 games of the Grizzlies for the No. 8 spot in the Western Conference.

McCollum started fast, scoring 19 points in the first half, and finished strong with two crucial 3-pointers in overtime. The first one to open the extra period gave Portland the lead for good, and he added six assists.

Memphis rallied from a 13-point, third-quarter deficit to take an 11-point lead, then gave it away almost as quickly.

When the Grizzlies recovered to take a 112-103 lead with 6:01 left in regulation, it appeared the Grizzlies might pad their lead in the standings. Instead, Anthony’s 3 with 37.5 seconds left tied it at 124 and Morant fell on a last-second fast break, sending the game to overtime.

Evan Fournier scored 24 points, Nikola Vucevic had 22 and Orlando picked up where it left off before the NBA season was suspended, beating Brooklyn.

Playing as the designated road team not far from their arena, the Magic looked right at home at Disney — whose name they wear as their jersey patch. They extended their winning streak to four and moved back ahead of the Nets into seventh place in the Eastern Conference.

Brooklyn also won its last three before the stoppage, but the decimated team that returned is a shell of the one that beat the Lakers in Los Angeles in its final game. The Nets are missing Spencer Dinwiddie, DeAndre Jordan and Taurean Prince after they tested positive for the coronavirus. They are already playing without Kevin Durant and Kyrie Irving, who had season-ending surgery.

Booker made all nine of his free throws and the Suns hit 30 of 32 from the line. They shot 52% from the field, with Ayton hitting two of three 3-pointers and going 11 of 14 overall.