SWS: Around 3.5M adult Filipinos got stranded in July due to quarantine 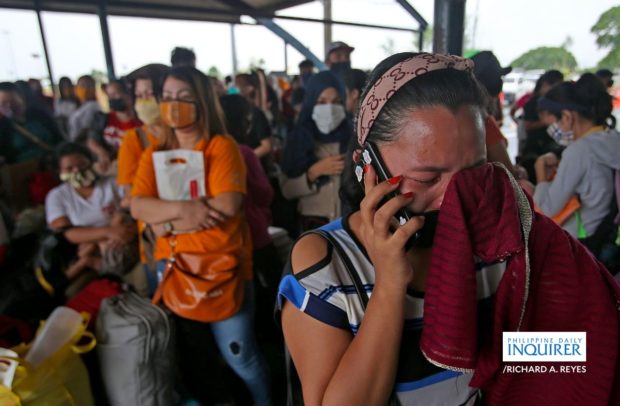 Stranded in Manila for months caused by enhanced community quarantine imposed to contain the coronavirus pandemic, Mary Ann Cayog from Davao Oriental cries as she talks to her mother over the phone while waiting for flight outside Ninoy Aquino International Airport Terminal 3 in Pasay City for more than 3 days on June 10, 2020. | INQUIRER file photo

MANILA, Philippines — An estimated 3.5 million adult Filipinos got stranded by community quarantine rules due to the coronavirus disease pandemic, according to the latest survey of the Social Weather Stations (SWS).

The survey conducted from July 3 to 6 found that 5.1 percent of adult Filipinos across the country were stranded due to several quarantine guidelines.

“This is an estimated 3.5 million stranded, based on the 2020 projected population of 69.5 million adults (18 years old and above),” SWS said in the survey results released Wednesday.

The SWS noted that  the July figures were  almost the same as the 5.4 percent or an estimated 4.1 million working-age persons (15 years old and above) stranded by the community quarantine in May. The poll body said the differences are not statistically significant between these two probability samples.

The respondents are composed of 306 in Metro Manila, 451 in Balance Luzon, or Luzon outside of Metro Manila, 388 in Visayas, and 410 in Mindanao, according to the poll body.