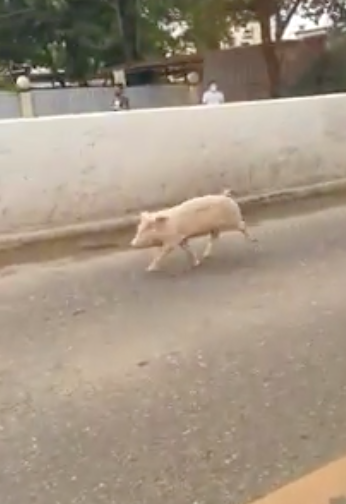 CEBU CITY, Philippines— A pig that escaped from its pigpen disrupted the early morning flow of vehicles in one of the barangays in Cebu City this Wednesday, August 5.

Some motorists came to a halt to allow the pig and the men who were chasing it to pass.

As of this writing, it remains unclear where the pig came from and where it was finally cornered by those who were after it.

But one thing for sure, the presence of a pig that was running loose forced several motorists to either come to a stop or slow down while it traversed the northbound lane of the flyover in Barangay Banilad.

And the amused motorists did not seem to mind having to give way to an animal who wanted to experience what being away from its pigpen is like.

The commotion happened at around 8:30 a.m. on Wednesday.

“At first I thought it was an accident kay people were looking down sa flyover then a guy was running up sa bridge nga murag something na kinanglan ug attention. But suddenly a pig appeared,” said netizen Adnan Pacasum.

(At first, I thought that a vehicular accident just happened in the area because people were looking down from the flyover until we saw a guy who was running that caught our attention.  Then suddenly we saw the pig.)

Uncertain of what was actually going on, some of the motorists even started to honk their horns to catch the attention of those who were traveling ahead of them and to signal them to already move forward.

But their mood started to lighten when they saw the pig running wild.

Pacasum, a resident of Barangay Talamban, was quick to bring out his cellphone and took a short video of the chase and immediately posted this on his social media page.  He was about to climb the flyover’s southbound lane when he saw a group of men chasing the pig.

On Tuesday, an ostrich also caught social media attention after it started to run loose while inside a subdivision in Quezon City.

The sight of animals on the loose brought smiles to the faces of some netizens, who took these peculiar incidents as a temporary source of relief during this time of a pandemic.

Piglet on the loose in Cebu

WATCH: Someone's really playing Jumanji! From the running ostrich in Quezon City, now, a piglet is on the loose here in Cebu! Netizen Adnan Pacasum posted on his Facebook account this morning, August 5, a short video of not-so-ordinary pedestrian running on the flyover in barangay Banilad, Cebu City. | Immae Lachica

A video of the pig’s chase which CDN Digital shared on its Facebook page generated 3, 400 engagements and 2, 200 shares in just two hours.

“Piglet da visayas, ostrich sa Luzon….. Mindanao what can you say about the situation…,” netizen Ember Moso posted as a comment to the CDND video.

Ventolero was referring to Kapa founder Joel Apolonario who was arrested by the police while hiding in an islet in Surigao del Sur.

After Wednesday’s wild chase, are we to also expect another similar incident from parts of Mindanao? Let’s just keep our fingers crossed that the next animal chase in the country will not involve kins of Lolong, Mindanao’s famous saltwater crocodile. / dcb

By: Morexette Marie B. Erram
Music