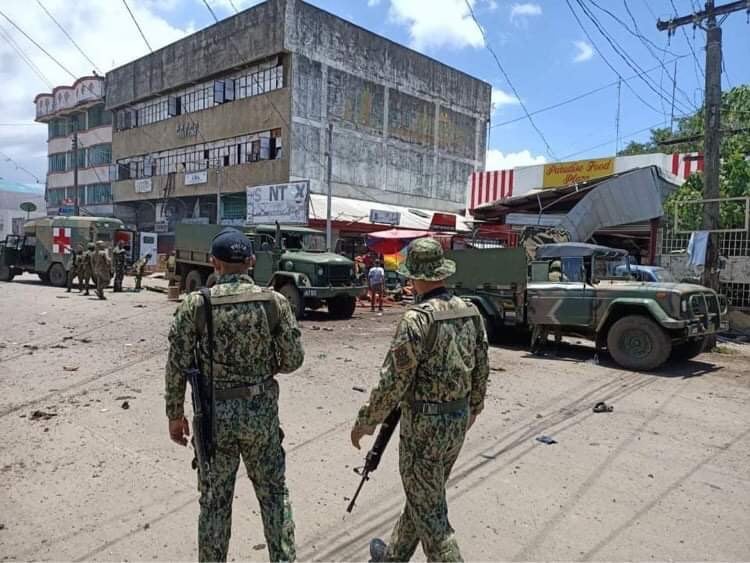 At least 15 individuals were killed while 70 others were injured during the Jolo blast on Monday. | Contributed Photo

CEBU CITY, Philippines –The military is asking Cebuanos to be vigilant and to immediately report the sighting of suspicious activities or suspicious-looking individuals in their respective communities.

Captain Joe Patrick Martinez, commander of 3rd Civil Relation Group of the Central Command (CentCom) of the Armed Forces of the Philippines, said that vigilance will help deter terror activities from happening here.

Martinez issued his appeal following the twin blasts which killed at least 15 individuals and injured 70 others in Jolo, Sulu on Monday, August 24.

Soldiers at CentCom, Martinez said, have been on red alert since the blasts.

Martinez said they do not want a similar terror attack to happen here and threaten the peace in the Visayas.

To prevent the entry of terrorists, tightened security has been ordered in all seaports in the region.

However, Martinez said that they also need the help of residents in monitoring the movement of suspicious-looking individuals in the different communities here.

“We still urge everyone to be vigilant because this is a shared responsibility ang security. People should also be alert. We give this constant reminders sa publiko na any suspicious individual or situation sa kanilang palibot ay dapat nerereport nila… We don’t want that [Jolo bombing] situation to happen here,” he said.

He said that soldiers working with the residents will send a clear message to terror groups that their presence is unwanted and that the people will ensure that they keep peace and order in their communities.

Martinez gave the assurance that CentCom is doing its best to security people in the Visayas.

“Makakaasa po kayo na your Central Command will continue its mandate to secure all community against any kinds of threat na pwedeng ma experience,” he added. / dcb