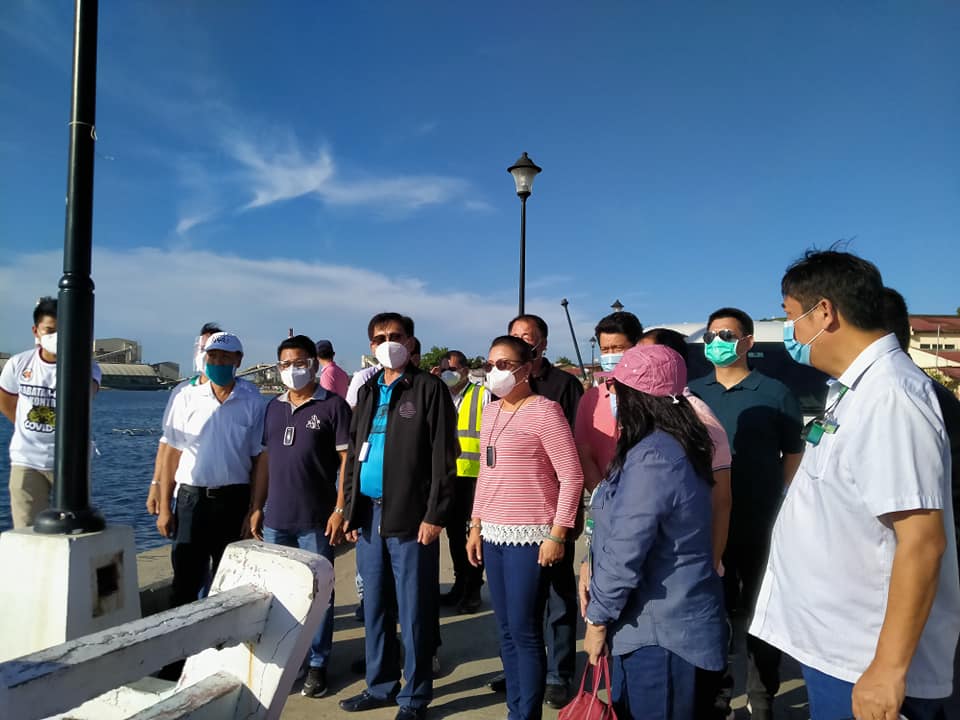 DENR Secretary Roy Cimatu (third from the left) is flanked by officials from Toledo City, and Cebu PENRO as they inspect the area in Brgy. Poblacion, Toledo City where the planned 11-hectare reclamation area will be formed. (Photo courtesy of Toledo City PIO)

The reclamation would cover 11-hectares off the coasts in the city’s Barangay Poblacion that directly faces the Tañon Strait Protected Seascape, a biodiversity-rich body of water between Negros and Cebu islands.

Environment Secretary Roy Cimatu, in a recent visit to the city, located west of Cebu City, reportedly gave the go-signal for the project to proceed.

Toledo City Public Information office John Roseller Layan, in a separate interview, said the city only needs to complete the remaining documentary requirement for the project before it would start to roll.

“Basically, the concept of this [project] is like that of SRP (South Road Properties of Cebu City) to make Toledo City a commercial hub in the midwest of the province of Cebu,” Layan told CDN Digital.

Layan added that during Cimatu’s visit, the latter saw that “there was nothing to protect” in the location as it is only occupied by rocks.

(The local government unit already conducted a study [on the viability of the reclamation project.]  During the administration of former mayor John Henry Osmeña, he commissioned a team of divers and saw the area only has rocks.  Sec. Cimatu raised the same observation after going over some documentation.)

The development, however, did not sit well with the environment group who warned that the project “will put the health and well-being of their poor coastal communities in jeopardy.”

“Why the apparent rush to proceed with the project at this time when the priority should be to stop the spread of COVID19 infection and help the people recover from the socio-economic impacts of the COVID-19 pandemic? Toledo City is home to poor fisherfolks dependent on the Tañon Strait for their food and livelihood. Ironically, the local government seemed to be preoccupied with an ecologically destructive project that will put the health and well-being of their poor coastal communities in jeopardy,” Oceana said in an emailed statement.

Oceana Vice President Gloria Estenzo-Ramos explained that the dumping and filling of the coast of Toledo City would destroy the protected seascape of Tañon Strait that is an important migration corridor and habitat for marine mammals.

Hammerhead sharks are some of the endangered species found in the Tañon Strait between Cebu and Negros islands. | Contributed photo/ OCEANA Philippines

Estenzo-Ramos said the project should not be allowed as it will destroy fishing grounds and marine habitats and displace fisherfolks which may result in failure to meet food security and resiliency that “should be a priority amid the pandemic and climate crisis we face.”

“This will also endanger the livelihood of small artisanal fisherfolks dependent on the rich fisheries resources of this narrow body of water between Negros and Cebu for their livelihood,” she said.

Ramos added that apart from a comprehensive Environmental Impact Study and participatory process, an Environmental Compliance Certificate, an area clearance, and the authority to reclaim from the Philippine Reclamation Authority (PRA) are required in addition to the Protected Area Management Board (PAMB) approval.

The group cited President Duterte’s Executive Order No. 74 which directs for a cumulative impact assessment and hydrodynamic modeling, among other requirements for such project, and the requirement set by the Climate Change Act that local governments and all government agencies integrate climate impacts in all its policies and programs.

According to Oceana, a project that will destroy fishing grounds and marine habitats and displace fisherfolks can not provide food security and resiliency that should be a priority amid the pandemic and climate crisis we face.

When the project was first introduced in 2015, Oceana sent a letter of interrogatories to the Department of Environment and Natural Resources (DENR), Department of Interior and Local Government (DILG), National Economic Development Authority (NEDA), Department of Justice (DOJ), and Bureau of Fisheries and Aquatic Resources (BFAR) on the mandates of Toledo City and government agencies to protect the environment under various environmental laws.

Oceana conducted an underwater assessment at the proposed area targeted for reclamation and found rare species of seagrass and marine creatures. According to Oceana, the PRA, then, declared that their office has not received any application to reclaim nor has it rendered an approval of the project. / dcb