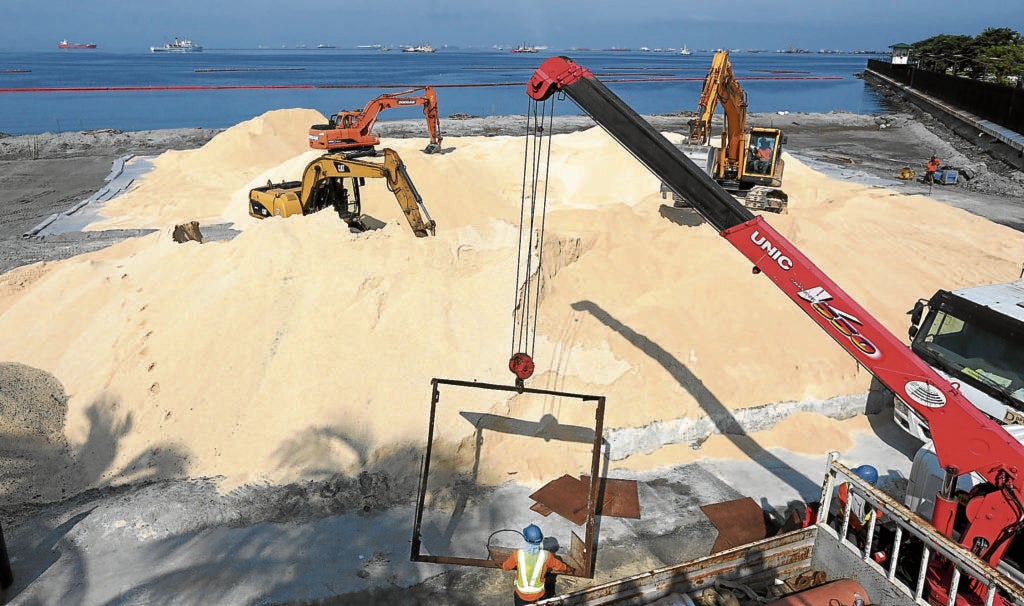 Workers in this September 5, 2020 photo continue to pour white sand composed of crushed dolomite over the 500 meter stretch of Manila bay, part of the DENR’s Manila bay rehabilitation project aimed at discouraging people from littering in the ocean that has now drawn ire from advocates. |INQUIRER/ MARIANNE BERMUDEZ

MANILA, Philippines — The Department of Environment and Natural Resources (DENR) claims that the “white sand” being poured to create a beach on a stretch of Manila Bay’s rocky shore poses no harm to the bay’s ecosystem, but independent safety reports by foreign contractors point out that dolomite — the rock pulverized to produce the false white sand — can cause respiratory ailments and is a potential carcinogen.

In an interview with the Inquirer on Sunday, maritime affairs expert and University of the Philippines law professor Jay Batongbacal said the reports from US contractors about the potential harm the dolomite being poured on a 500-meter stretch of Manila Bay’s shore could be ground for filing a petition for a writ of kalikasan, a legal remedy to halt projects potentially damaging to the environment.

In its safety data report submitted in 2012, Texas distributor and builder Lehigh Hanson Inc. warned that dolomite could cause skin and eye irritation, as well as cancer and damage to the lungs through prolonged or repeated exposure.

Another company, Lhoist North America, warned in its own safety data report submitted in 2018 that dolomite contains crystalline silica, classified as a potential carcinogen when inhaled by humans.

“Inhalation of silica can also cause a chronic lung disorder, silicosis,” Lhoist said in its report.

If true, Batongbacal said, it is possible for opponents of the DENR project “to secure from the courts a writ of kalikasan and injunction against the project, given the potential harm of dumping tons of potentially toxic particulates along a densely populated area.”

“This is why any agency should have conducted a thorough assessment of a project first,” Batongbacal said. “The DENR definitely violated several laws. Even something as basic as a consultation with the local government[s] was not done.”

It is part of the P397.9-million Manila Bay rehabilitation program launched by Environment Secretary Roy Cimatu in January last year, and is expected to be finished by Sept. 19.

Taken from CebuThe dolomite reportedly came from Cebu, alarming local officials, who also complained that it was taken from their province without their knowledge, much less benefit to the locality where it had been extracted.

Environmental and fishermen’s groups oppose the project, saying it would only worsen the degradation of the bay’s environment.

The environmental watchdog Greenpeace Philippines on Thursday said the project was a waste of money because backwash would carry the synthetic sand into the bay, while the fishermen’s group Pamalakaya denounced it as “whitewashing the government’s failure to rehabilitate Manila Bay.”

Gloria Estenzo-Ramos, president of Oceana, said the DENR did not comply with the mandatory environmental impact assessment study required under Presidential Decree No. 1586 and the Philippine Fisheries Code of 1998.

Both laws require a thorough assessment of possible effects of any project deemed to have an adverse impact on the environment and surrounding communities. These include expansion or rehabilitation of specific areas.

The DENR earlier said it did not have to comply with this requirement, claiming a mere “beach nourishment” need not undergo such an assessment.

“That’s not correct,” Batongbacal said on Sunday. “As long as there is a potential negative effect, there is a need for that. In fact, you can only find out if it has [adverse effects] if you actually comply with the [environmental impact assessment].”

In the 2008 Supreme Court ruling ordering 13 government agencies to clean up and rehabilitate Manila Bay, he said, there was no mention of a “beach nourishment plan.”

“They had all these interventions lined up targeting pollution, enforcement of marine laws on illegal fishing, basically [geared toward] better management of the bay. The beach nourishment plan was not even mentioned in the plan, especially when every activity should be coordinated,” Batongbacal said.

“Cebu is even one of the 10 provinces considered to be [landslide-prone areas],” she said. “This is why the [environmental impact assessment] is necessary for both [Manila and Cebu].”

Ramos said several environmental groups planned to write a position paper on the matter before going to court.

“A legal remedy is a last resort because it takes so much time. For now, we are hoping they [will] listen to our concerns and answer us with transparency,” she said.

“This is not a rehabilitation but destruction of the environment,” Ramos said. “This is a waste of [taxpayer] money when other agencies cannot find [funds] because of the pandemic. So imagine their nerve to assert that this project was already in the pipeline. So heartless.”