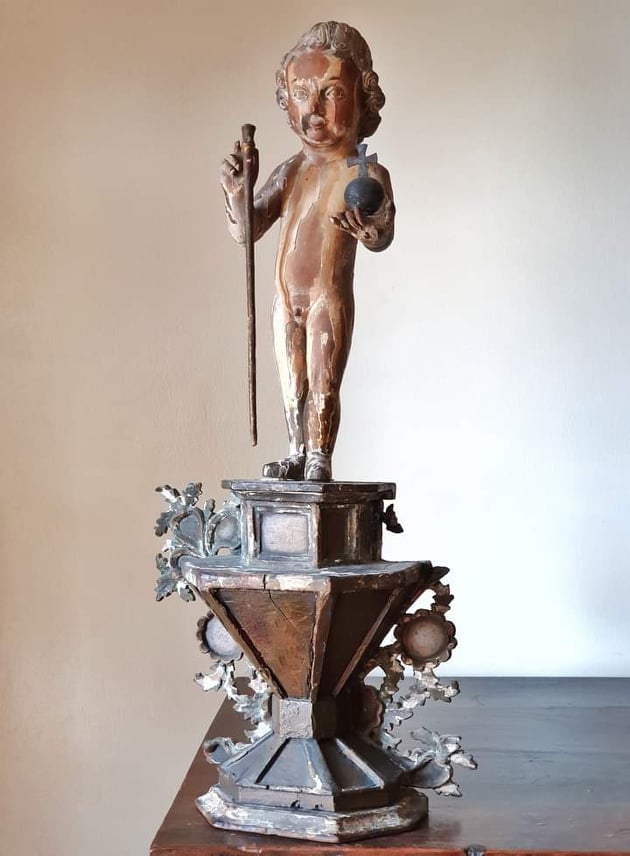 The Diocese of Maasin confirmed that the lost Sto. Niño de Malitbog has been found in the possession of a collector from Metro Manila, who has reached out to the Diocese of Maasin with the intention to restore and return the image to Malitbog. | Photo Courtesy of Francis Ong

CEBU CITY, Philippines — The Santo Niño de Malitbog is one of the greatest mysteries in Southern Leyte because in the late 1980s the image was lost or stolen when it was brought to Cebu City to join the annual Sinulog festival.

The locals believed that because the Santo Niño was lost, on His feast day on January, rains would sweep the town like a lost child weeping for its mother.

As decades go by, the Diocese of Maasin almost lost faith that it would ever be found again.

Yet on September 2020, a collector from Manila named Francis Ong has reached out to the Diocese to inform them that he might be in possession of the Holy Image.

In a Facebook post, Ong said he found articles and photos pertaining to the lost Sto. Niño,. and he suspected that one of his own Sto. Niños could be the lost image from Malitbog.

“It seems the Santo Niño in my possession shares an uncanny resemblance to the missing Santo Niño venerated in Malitbog, Southern Leyte that was stolen way back in the 80s,” said Ong on his Facebook page.

Ong reached out to his friend who was making a Sto. Niño for Maasin to be used for the 500th year of Christianity in the country and the sculpture reached out to the Diocese.

The Diocese of Maasin Chancellor, Fr. Mark Vincent Salang, confirmed to CDN Digital in a phone interview that the image under Ong’s possession is in fact the lost Sto. Niño of Malitbog town.

He said that the diocese wrote to Ong today, September 18, 2020, to thank him for reaching out to them and for offering to return the Sto. Niño to its home in the Sto. Niño Parish in Malitbog.

“More than 30 years, niresurface siyag balik. Naay nakit-an nga article by one of the faithful diri sa atong diocese and with the help of some experts and kami sad sa Diocese positive nga mao na ang Sto. Niño nga nawala, so salamat sa Diyos nga he (Ong) is very much willing to give it back to the diocese,” said Salang.

(More than 30 years since we lost it, he has resurfaced. One of the faithful saw an article and with the help of some experts, we here at the diocese is positive that that is the lost Sto. Niño, so thank God he (Ong) is very much willing to give it back to the diocese.)

Fr. Salang said Ong has volunteered to restore the Sto. Niño to its formal glory before returning it to Malitbog, and the restoration would be expected to be completed by October 2020.

This means that the lost Sto. Niño will be home in time for the 500th year anniversary of the first Mass in Limasawa on March 31, 2021.

The chancellor will personally fetch the Sto. Niño in Manila to bring it home to Maasin.

(This discovery to bring back the Sto. Niño is of great importance to the people of Malitbog and the Diocese of Maasin because it will strengthen our faith to the Señor Sto. Niño because the youth can see the image of the Sto. Niño.)

For the Sto. Niño to be found decades after it was lost and months before the 500th year anniversary, it can be considered a miracle or a chance of faith.

Perhaps, in 2021, Malitbog would experience a sunny Sinulog as the Sto. Niño is home./dbss