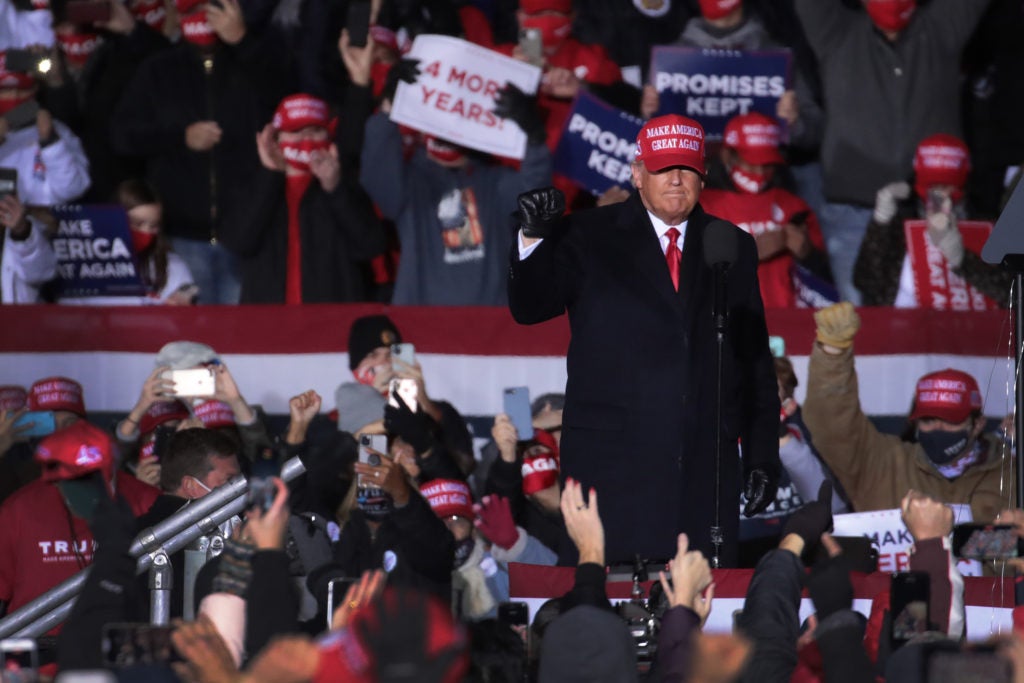 President Donald Trump speaks to supporters during a campaign rally at the Kenosha Regional Airport on November 02, 2020 in Kenosha, Wisconsin. Trump, who won Wisconsin with less than 1 percent of the vote in 2016, currently trails former vice president and Democratic presidential candidate Joe Biden in the state according to recent polls. | Scott Olson/Getty Images/AFP

Kenosha, United States—President Donald Trump rallied late Monday in Kenosha, the Wisconsin city at the center of racial protests this summer, in a final hour bid to prove the polls wrong and retain the White House, while his challenger Joe Biden predicted victory and told America to “take back” democracy.

On the eve of Election Day in the tensest race in recent memory, Trump flew to five rallies in four swing states, hammering home the dark message that his Democratic opponent will bring anarchy and that attempts are being made to rig the result against him.

The choice of Kenosha for his penultimate rally underlined his push to make right-wing anger over nationwide anti-racism protests a keystone of his campaign.

It was here in August during a botched arrest that police shot a Black man at close range while his children looked on, sparking riots and inflaming widespread anger already spreading across the United States.

“We brought law and order to Kenosha,” Trump said to cheers, as soon as he took the stage. “They’re waging war on our police.”

For the finale of a three-day marathon that saw 14 rallies, he was then to fly for a late-night speech in Grand Rapids, Michigan.

Trump also wrapped up his campaign in 2016 in Grand Rapids on the eve of defeating Hillary Clinton in an upset that traumatizes Democrats to this day — and which Trump, 74, says he can repeat on Tuesday.

“We finished up there four years ago,” he said in Kenosha. “I’m a little bit superstitious. Let’s do it the same way.”

This time, however, much has changed, starting with the Covid-19 pandemic that has taken some 231,000 American lives and badly damaged the economy that had been Trump’s biggest selling point.

Despite an often startlingly quiet campaign, Biden, 77, finds himself riding ahead in almost every poll that counts on election eve, buoyed by his consistent message that America in crisis needs new more responsible leadership.

He made his own closing argument on Monday with events in Cleveland, Ohio, and then Pittsburgh in the ultimate swing state of Pennsylvania, where he was joined by pop superstar Lady Gaga — in black platform shoes and a glittery “VOTE” mask — for a drive-in rally. 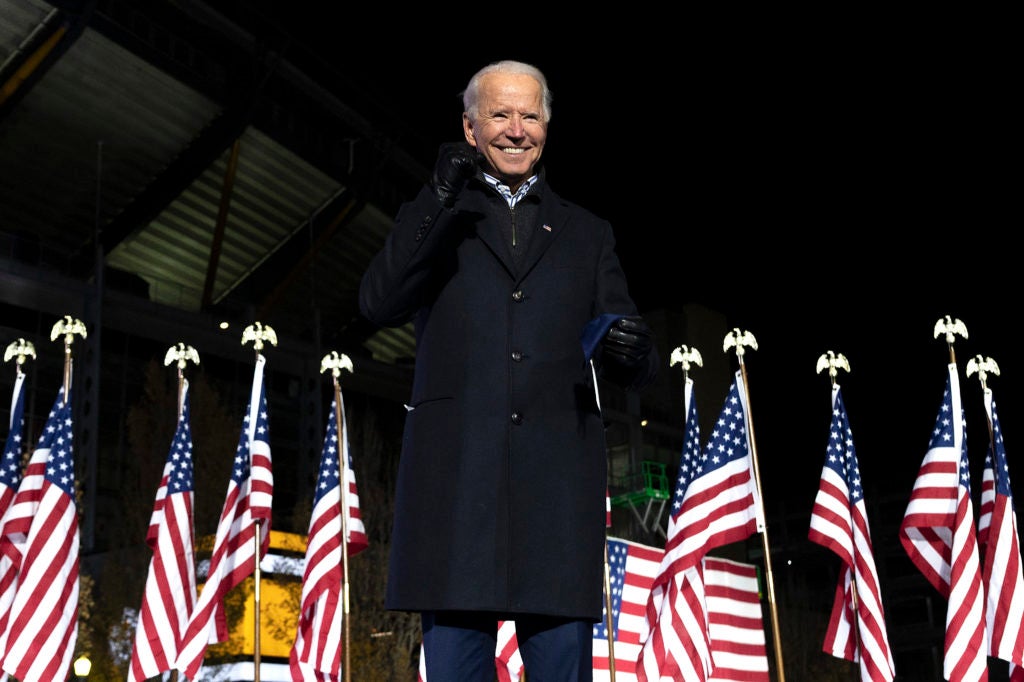 Democratic Presidential candidate and former US Vice President Joe Biden gestures after speaking during a Drive-In Rally at Heinz Field in Pittsburgh, Pennsylvania, on November 2, 2020. | Photo by JIM WATSON / AFP

“I have a feeling we’re coming together for a big win tomorrow,” he said. “It’s time to stand up and take back our democracy.”

In one of US history’s great political gambles, Biden has stuck to these kinds of socially distanced gatherings with small crowds or people segregated in their cars right up to the last moment — in stunning contrast to Trump’s constant, large rallies where few supporters so much as bother with masks.

The Democrat clearly feels that his calmer approach and strict attention to pandemic protocols is what Americans want after four tempestuous years.

In chilly downtown Pittsburgh, Justine Wolff said she had cast her ballot for Biden already and was cautiously hopeful he would carry the state.

“I hope that people have seen the writing on the wall,” said the 35-year-old nurse. “We need some kind of change because this isn’t working for anybody.”

Tuesday is formally Election Day but in reality it marks the culmination of a drawn-out election month.

With a huge expansion in mail-in voting to safeguard against the Covid-19 pandemic, nearly 100 million people have already cast ballots, highlighting the passion in what is turning into a referendum on the norm-shattering Republican’s first term.

But where many of the early votes are believed to have been cast by Democrats — encouraged by Biden to take advantage of the opportunity — Trump’s side is hoping for a massive wave of Republican supporters voting in person on Tuesday.

Trump himself is planning to visit his campaign headquarters in Virginia, while Biden will travel to his birthplace of Scranton, the scrappy Pennsylvania town where Trump also visited on Monday.

For weeks, Trump has made unprecedented claims that the election will be rigged against him. He has ramped up these warnings in the final days, focusing especially on Pennsylvania’s rule allowing absentee ballots received within three days after Tuesday to be counted.

In a tweet flagged with a warning label by Twitter on Monday, he said this would “allow rampant and unchecked cheating and will undermine our entire systems of laws.”

“It will also induce violence in the streets. Something must be done!” Trump tweeted.

“It’s going to be cheating,” he said during the Wisconsin rally.

Read Next
Superstitious Trump ends campaign in same city as 2016